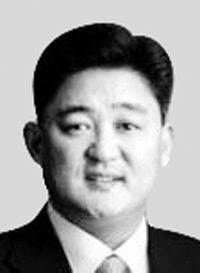 Prosecutors are investigating allegations that businessman Hwang Du-yeon has abused his special status with Hyundai Group to illegally receive 6 billion won ($5.3 million) in loans from Hyundai Savings Bank and rake in about 3 billion won in consultation fees from affiliates of the conglomerate.

The questionable connection between Hwang, who is president of Integrated Strategic Marketing Group Korea, and Hyundai Group has sparked speculation over his close personal relationship with Hyun Jeong-eun, the chaebol’s chairwoman. Prosecutors aren’t ruling out the possibility that the money Hwang amassed might have been used to form a slush fund.

Hwang is a son-in-law of the chairman of major broadcaster SBS, Yoon Se-young.

It has been rumored that despite the fact that Hwang has no official position within Hyundai Group, he is a powerful force in the conglomerate’s decision-making process.

The Seoul Central District Prosecutors’ Office said it is looking into real estate investment firm WM Investment, which Hwang founded, and a subcontracting company that has frequently dealt with Hyundai Savings Bank called Thought, in which Hwang’s wife has a large stake.

Hwang is a powerful figure in both businesses and both have allegedly received large sums of questionable money from Hyundai Group affiliates.

Prosecutors were tipped off by Financial Supervisory Service regulators that Hyundai Savings Bank didn’t go through due process in providing two loans to Thought, one for 5 billion won in February and one for 1 billion won in August 2012.

The JoongAng Ilbo reported Tuesday that prosecutors are investigating whether WM Investment received hundreds of millions of won from Hyundai Group affiliates by claiming to have provided consulting that it never actually did.

Investigators have discovered that Hyundai affiliates, including Hyundai Merchant Marine, gave Hwang’s firm 3 billion won in consultation fees and are looking into whether that money was used to create a slush fund.

They’re also checking out the possibility that Hyundai Group executives were involved in the transaction.

“We are planning to look into all questionable issues in our probe,” said a prosecutor involved in the case.

The investigation follows revelations from the Hyundai Securities labor union in November that Hwang was the one pulling the strings at Hyundai.

The union disclosed a transcript of an executive meeting last September in which Hwang had the final say on business decisions.