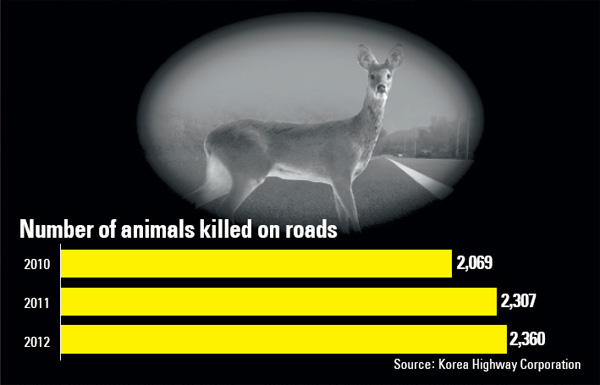 Roadkill is becoming a problem in car-crazy Korea.

Big animals like deer are being struck by speeding motorists ? and sometimes it’s the human who dies in the encounter. And small creatures like frogs and migratory birds are getting run over, too.

According to the state-run Korea Highway Corporation, the number of mammals killed by vehicles has steadily increased to reach 2,360 last year from 2,069 in 2010.

A total of 39 animals including deer were struck by vehicles and killed last year in a single 5-kilometer (3.1-mile) section of the Daejeon-Tongyoung Highway from the Insam Land rest area to the Mt. Geum intersection. That’s one animal killed every 10 days.

“The 5-kilometer stretch is near the national park at Mt. Douku, so there are a large number of deer in the area,” said Seo Jong-do, deputy director of the Muju office of the Korea Highway Corporation. “We have put up banners and signs alerting drivers to watch out for animals, but to little effect.”

With an increasing number of accidents involving animals weighing 10 kilograms (22 pounds) or more, human casualties have also increased. On June 17, a 31-year-old motorist surnamed Lee hit a utility pole while driving his Hyundai Avante in North Chungcheong, sustaining a severe injury. He told police he was trying to avoid a deer. In May 2011, a 37-year-old motorist surnamed Kang was found dead in his car after he hit a fence on a road in Gangwon. The corpse of a deer was found nearby.

Amphibian species like frogs are extremely vulnerable to high-speed cars and many can be wiped out if a road runs through their breeding ground or habitat.

“There are many occasions in which newborns of migratory birds fall from their nests onto roads and become roadkill,” said Kim Eui-kyung, an official at the National Park Research Center.

In an effort to reduce the deaths of animals on roads, the government is setting up crossings for animals on highways. The Korea Highway Corporation plans to add 19 such crossings by 2015. Currently, there are 62.

“We have installed road signs to alert motorists to animals in the area and have cooperated with GPS navigation manufacturers to add animal-warning announcements,” said Tak Jong-hoon, deputy director at the green environment team at the highway corporation.