Coaches’ careers to be on line at East Asian Cup

Coaches’ careers to be on line at East Asian Cup 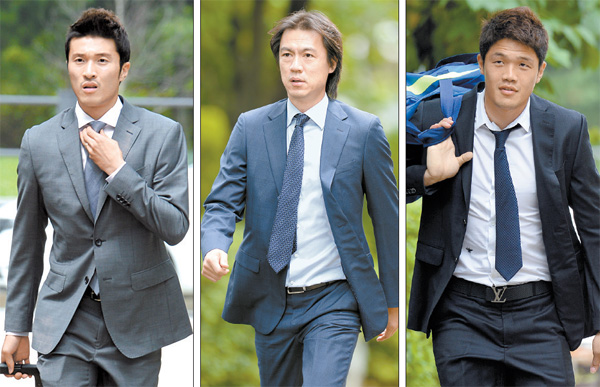 All of the men’s teams participating in the East Asian Cup will do their best to impress at the four-nation competition that kicks off in Seoul on Saturday.

Hong Myung-bo, who will make his debut as the national coach at the East Asian Cup, is seeking to redeem Korea, whose ego as the team that has qualified for the most World Cups in Asia was hurt by two straight losses to Iran during the qualification for 2014 Brazil World Cup.

Korea managed to qualify for its eighth successive World Cup as a runner-up from Asia Group A thanks to a goal differential to Uzbekistan.

Former coach Choi Kang-hee quit amid criticism for failing to cure - or even worsening - the team’s lack of cohesion, which once was a hallmark of the 2002 World Cup semifinalists.

Choi’s squad, considered one of the strongest teams that Korea has ever had, was ridiculed as mediocre and harsh messages by Ki Sung-yueng of Swansea City directed at Choi on his Facebook page revealed a long-standing division within the team.

Hong, the manager of the bronze medalist at the London Olympics, replaced Choi last month and pledged to steer the Taegeuk Warriors out of trouble during the East Asian Cup.

“The East Asian Cup will be a good stage where Korea recovers a crashed public trust,” Hong said.

China is coming off a 5-1 loss to Thailand, which cost the Chinese coach his job, and will try to recover its reputation as an emerging football power at the Cup.

China sacked Spanish coach Jose Antonio Camacho after the loss to Thailand in Hefei, Southeastern China, on June 15. Fu Bo, China’s U-22 national team coach, is taking the helm of the Chinese team during the Cup.

Japan, led by Italian manager Alberto Zaccheroni, will try to ease domestic concerns after it failed to pick up a single win at the Confederations Cup in Brazil last month. Australia, led by Holger Osieck, which is making its debut at the Cup, will also try to make its presence felt in Asia.

The coaches are on alert because the results of the East Asian Cup could affect their careers.

When the Korean men’s team finished last at the second edition held at home in 2005 with two losses and a draw, it sacked coach Jo Bonfrere. Vladimir Petrovic, who managed China during the third edition held in China in 2008, was let go four months after China finished third behind Korea and Japan.

Huh Jung-moo, Korea’s coach during the fourth edition held in Japan in 2010, faced strong public pressure to step down after Korea suffered a 3-0 rout to China, as did Japanese coach Takeshi Okada, whose team lost to Korea 3-1 in Tokyo at the 2010 East Asian Cup. Neither of those coaches quit.

Because the event is not held during the A-match window, all the teams are packed with players from domestic teams, which will serve as extra motivation for them, because they will need to compete with overseas stars to get playing time at the World Cup.

Hong’s 23-member squad is mostly K-League players, including those playing on the national team for the first time, such as Kim Min-woo of Sagan Tosu, Kim Dong-sub of Seongnam Chunma and Yun Il-lok of FC Seoul.

Korea’s men’s team will open the Cup against Australia at the Seoul World Cup Stadium on Saturday.

JTBC is the exclusive broadcaster of the East Asian Cup.