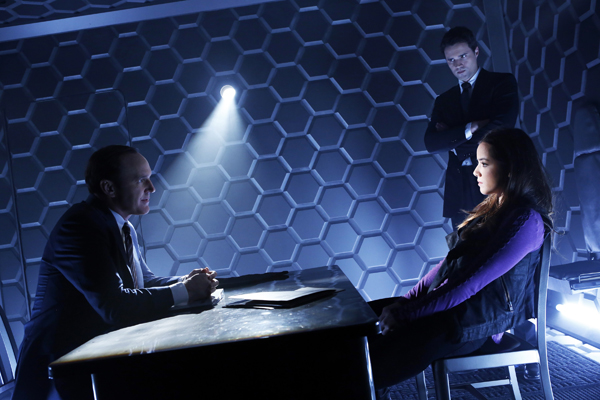 A scene from “Marvel’s Agents of S.H.I.E.L.D.,” starring, from left, Clark Gregg, Brett Dalton and Chloe Bennet, and produced by ABC Studios and Marvel Television. [AP/NEWSIS]

LOS ANGELES - Trekking to San Diego for Comic-Con is usually just another summertime destination for the likes of “The Walking Dead” mastermind Robert Kirkman. However, this year’s pop-culture bonanza will serve as a major milestone for him: the 10th anniversary of the comic series that spawned a hit TV show and undead phenomenon.

“Bigger is always better,” he said. “I know some people say, ‘Hey! It used to be this quaint little convention where you could buy back issues, but damn it, now Samuel L. Jackson is walking around, and it’s annoying.’ I think Comic-Con casts a huge spotlight on the comic industry. It only seems to get bigger, and I think that’s good for everybody.”

Over the past decade, the fan-driven event has transformed like an Autobot from a comic book celebration into a multimedia pop-culture extravaganza with presentations featuring celebrity appearances, casting announcements and never-before-seen footage from upcoming films and shows. This week’s 44th annual event, which officially kicks off today and runs through Sunday, is shaping up to be no different for famous Comic-Con veterans.

Hugh Jackman is taking his fourth trip to the convention. Last year, he made a surprise appearance with the robot brawler “Real Steel.” Jackman will spend this week in San Diego hyping “The Wolverine,” the upcoming stand-alone “X-Men” spin-off that marks the actor’s sixth time playing the iconic comic character that rocketed him to stardom.

“It’s gold,” said Jackman. “I love being with the fans. I’m excited to show them some stuff at the presentation.”

“The World’s End” director Edgar Wright is also making a return trip to the San Diego Convention Center to promote his upcoming end-of-the-world bar-crawl adventure with stars Simon Pegg and Nick Frost. He first attended in 2004 for his zombie farce “Shaun of the Dead,” and surprised audiences last year by unveiling test footage for Marvel’s “Ant-Man.”

“It’s definitely nerve-racking,” said Wright. “In the case of showing the ‘Ant-Man’ footage last year, I’m glad I did it. I was the one who was questioning (Marvel studio president) Kevin Feige a little bit. I kept asking him, ‘Are you sure this is a good idea?!’ He was like, ‘Totally! They’re gonna love it.’ I had doubts and was very happily proved wrong.”

The cast and creators of several TV shows will be on hand to tease upcoming seasons, including returning fan-favorites “The Walking Dead,” “Game of Thrones,” “True Blood” and “Once Upon a Time,” as well as new shows like “The Vampire Diaries” spin-off “The Originals,” android buddy cop drama “Almost Human” and “Marvel’s Agents of S.H.I.E.L.D.”

DC Entertainment publishers Dan DiDio and Jim Lee will again face fans’ queries during a panel. This year’s Comic-Con marks the 26th convention for Lee, who will be showing off “Justice League”-themed cars that he designed. The super-rides will be auctioned off for charity.

“It’s both an exhausting and re-energizing event,” said Lee. “You do the panels, the press, and you interact with fans. Once you walk out of Comic-Con, you’re completely exhausted because you’ve been going non-stop until three in the morning every night, but you’re also super-excited about the art form and the business.” AP