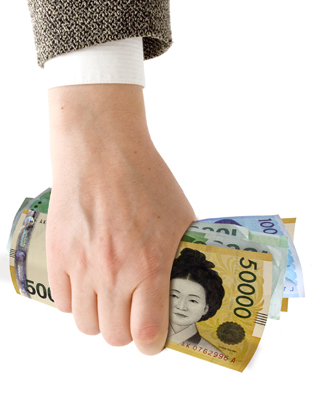 A doctor in his late 30s paid cash for a high-end electronic massage chair earlier this year. The chair, which retails at 2 million to 3 million won ($1,788 to $2,674), was offered at 1.75 million won. “The discount price was only when I pay in cash,” said the doctor, who wished to be identified only as Lee. “It was a bargain hard to pass up.”

A gym owner in Gangnam says he has been encouraging his top customers to pay cash for their one-on-one physical training. The service costs 5 million won a month and most clients are high-income earners such as doctors, lawyers and celebrities.

Such cash transactions are occurring more frequently than in the past since the government stepped up its auditing as part of an investigation into dodging taxes through offshore havens like the Virgin Islands.

According to a recent report by the JoongAng Ilbo, some department stores are asked by their VVIPs (very, very important customers) to erase records of credit card purchases so they can pay in cash as a way to hide their spending from the National Tax Service (NTS).

“The 50,000 won note currently accounts for 63.7 percent [of all currency circulating] and it is true that recently, demand for the 50,000 won note has gone up,” Bank of Korea Governor Kim Choong-soo said last month. “There are a lot of rumors surrounding this, but we’re not in the position to say what’s right and what’s not. However, we are closely monitoring the situation.”

With high-income consumers hiding their spending to avoid being audited, tax revenues have shrunk.

Although the drop in corporate tax is the biggest contributor to the decline, the amount of added value tax collected has also fallen sharply.

During the five-month period, added value tax, which is levied on purchases of goods and services, shrank by 1.8 trillion won year-on-year to 23.4 trillion won. Corporate taxes collected were 19 trillion won, 4 trillion won less than last year.

Already, there are growing suspicions that the government faces a 10 trillion won shortfall that could reach 20 trillion won by the end of the year.

Shrinking tax collections come at a time when the economy has been struggling to reach 1 percent quarter-on-quarter growth. With the government’s 17 trillion won supplementary budget and the central bank’s loose monetary policy, the Korean economy is expected to grow 2.7 percent to 2.8 percent this year, compared to 2 percent in 2012.

“The main reason is the ongoing stagnation in the domestic and global economies,” said an official with the tax agency. “But we cannot rule out the possibility of hidden transactions resulting in collection of less taxes, although it will likely be extremely limited.”

The recent passage of the so-called financial intelligence unit law by the National Assembly gives the NTS greater authority to track transactions. Previously, only financial regulators had access to transaction information.

Other government agencies are joining the movement including the Korea Deposit Insurance Corporation, which recently increased the ceiling to 1 billion won from 500 million won on payments to those who report hidden private fortunes.

The agency claimed that since 2002, when it established the center that receives such reports, 212 reports have been made and it was able to collect 30.7 billion won, paying out a total 1.7 billion won to 28 tipsters.

The government is confident it can reach its target. During a press briefing earlier this week, Deputy Prime Minister on Economics and Finance Minister Hyun Oh-seok said that in the second half, the tax shortfall will likely improve because of the economic recovery and ongoing crackdown on tax dodgers and illegal profiteers.

“There have been several steps taken against tax shortfalls such as readjusting the government’s spending,” Hyun said. “At this point, we have no separate measures planned for a tax shortfall.”