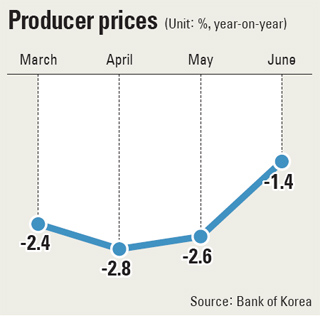 Korean producer prices in June fell again but at the slowest pace since December, central bank estimates showed yesterday, hinting that a long streak of declines in Asia’s fourth-largest economy might be ending.

The producer price index (PPI) in June fell 1.4 percent from a year earlier, the Bank of Korea said, compared to an annual 2.6 percent fall in May.

June’s decline was the ninth consecutive month of declining annual producer prices. However, it was the smallest decline since December’s 1.2 percent.

The slower fall was rooted in the smaller drop in industrial goods, which have the biggest weighting in the index.

Prices of industrial goods fell 2.7 percent last month on a yearly basis, compared with 4.4 percent in May, mostly on the back of rising coal and petroleum goods, the central bank said.

On a monthly basis, the PPI index did not change in June, compared with a 0.3 percent fall in May.

The central bank’s index numbers are preliminary estimates and are confirmed in the following month.