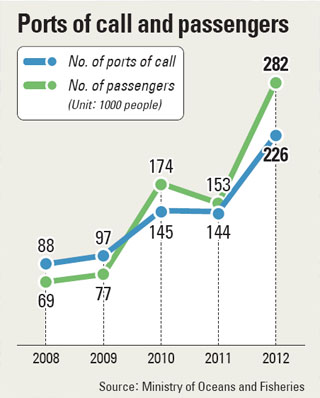 The government plans to foster Korea’s underdeveloped cruise industry with a goal of attracting 2 million foreign visitors and creating 30,000 jobs by 2020.

The Ministry of Oceans and Fisheries?announced a plan to improve the country’s infrastructure for cruise ships in response to the rapidly growing Northeast Asia cruise industry.

The ministry said that despite growing number of foreign cruise ships stopping in Korea, facilities to accommodate the huge vessels are poor.

The cruise industry has been expanding 8 percent annually since 1990, twice as fast as other parts of the tourism sector.

However, Korea has only three 80,000-ton docks at Busan, Yeosu and Jeju capable of accommodating cruise ships. The government aims to increase the number of docks to 12 by 2020.

Carnival is the top cruise operator with a 46.5 percent market share in the country, followed by Royal Caribbean, Star Cruise and MSC.

Learning from Singapore, the government will build accommodation, shopping, leisure and tourism?facilities near the ports.

The government will also encourage local ship lines to operate cruise ships by easing regulations on immigration, qualifications for cabin crew members and facility quality. Foreign crew will be able to receive working visas more easily, while companies will be able to choose between operating profit-based tax and tonnage tax, which calculates taxes based on distance traveled and size of ships.

There is one Korean cruise operator that runs Club Harmony, which was launched last year and suspended operations temporarily in January due to a lack of business. But its size is?only about a fifth of the world’s?largest, Voyager of the Seas (137,276 tons). The average size of cruise ships is 48,000 tons.

The government is also considering allowing foreigner-only casinos, which account for as much as half of cruise lines’ profit, on Korean-built cruise ships.

About 720,000 foreigners are predicted to stop at Busan, Jeju and Incheon this year.

“What is more important is to support local ship companies to enhance their competitiveness and allow Koreans to play in casinos on ships at least,” said Jang Joon-ho, a professor at Donga University.

The cruise industry is expected to generate more than 5 trillion won ($4.46 billion) in economic effects and create more than 30,000 jobs if a total of 20 million cruise tourists visit the country by 2020.

The government will also establish college courses to train students to work in the cruise industry.