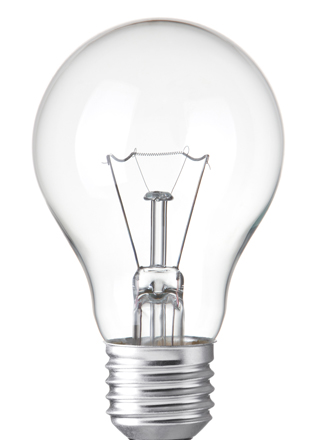 Production and import of incandescent lamps will be banned starting next year in order to help reduce waste of energy as the country is suffering power shortages every summer and winter.

The Ministry of Trade, Industry and Energy said on Tuesday that the government will prohibit production and import of all incandescent lamps according to its energy plan devised in 2008.

Last year, the government banned using 70- to 150-watt incandescent lamps. From next year, those over 25 watts and 70 watts or less will also be prohibited.

Incandescent lamps are known as inefficient power guzzlers that release 95 percent of power back into the air.

Korea first introduced the lamps in 1887 to illuminate Gyeongbok Palace.

According to the Energy Ministry, if all incandescent lamps were replaced, about 1,800 GWh of electricity would be saved each year, equivalent to the total power consumption of 650,000 households.

Alternatives to the lamps will be LED lamps that help cut about 80 percent of lighting expenses.

It is a global trend with many countries banning the use of incandescent lamps. In 2007, the leaders of the Group of 8 countries agreed to ban the lamp as part of global energy policy. The Organization for Economic Cooperation and Development is also pushing for the removal of the lamps from its member countries gradually.

According to the Energy Ministry, there are about 30 million incandescent lamps being used currently, mostly at outdoor markets and farms.

There is only one company producing the lamps. Most of the lamps in use are imported from China.