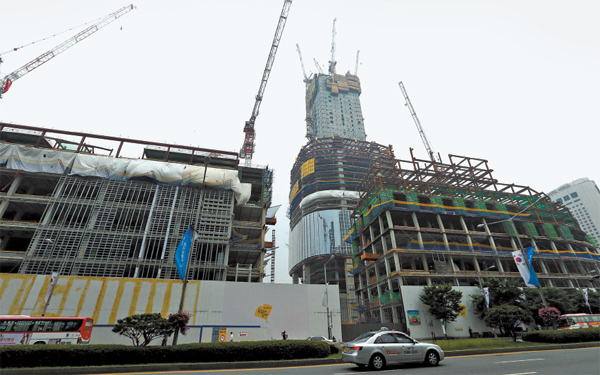 The second Lotte World in Jamsil, southeastern Seoul, is under construction. It is one of the major business expansion Lotte Group has pursued in recent years. [JoongAng Ilbo]

Lotte Shopping employees have been on full alert since agents from the National Tax Service (NTS) made an unexpected visit Tuesday not long after the agency crackdown on CJ Group.

“We are very much disconcerted by a large-scale tax audit at a sensitive time like this,” said a spokesperson for Lotte Shopping. “Since 2009, we have never gone through a tax investigation.”

It was reported that about 150 agents from the Seoul Regional Tax Office searched the headquarters of Lotte Shopping’s major affiliates, including Lotte Department Store, Lotte Mart, Lotte Super and Lotte Cinema in different parts of Seoul.

The agents reportedly secured accounting documents and related data as well as downloaded computer hard drives from the companies’ executives.

This is the second time that Lotte Group has been under the tax agency’s microscope. The first tax investigation took place in February and the target of the investigation was Lotte Hotel, which is a de facto holding company of the retail group.

However, industry insiders say this time the mood is different, considering that the tax agents made a surprise visit, unlike a regular tax audit like the one at Lotte Hotel, where the NTS notifies the companies beforehand.

And the NTS team that raided the offices is known as a special unit within the tax agency, dedicated to special investigations of big corporations accused of tax evasion.

Although the NTS has not made any public comment, industry insiders expect the probe to be concentrated on illegal capital flows, tax evasion and unfair business practices, such as placing a large portion of their work with affiliates. It is also looking into Lotte Shopping’s overseas operation, which has grown significantly in recent years.

The influence of Lotte Group Chairman Shin Dong-bin, although he has been with the company for a long time, started to expand aggressively in the mid-2000s. Shin was especially eager to press global expansion during the Lee Myung-bak administration.

Since 2004, when he headed the strategic office of Lotte Group, Shin has led many mergers and acquisitions, including with a retailer in China in 2009 and the department store and mart business of Korean rival GS Retail.

The business community speculates the tax probe will likely concentrate on Lotte Group’s overseas business expansion, including if the finances to pursue mergers and acquisitions involved any tax havens.

It also has been reported that some affiliates are being questioned on placement of work contracts. In the case of Lotte Data Communication Company, 80 percent of its 500 billion won ($446 million) in sales were from affiliates.

In addition, Lotte Cinema’s snack bar business, which it closed this March, has been criticized for doing business with Yuwon Commerce, the company run by one of the family members of the Lotte Group chairman.

Lotte Group Chairman Shin holds the largest stake in Lotte Shopping with 13.46 percent. When included with the 0.93 percent owned by Shin’s father and the founder of Lotte Group, Shin Kyuk-ho, the Lotte-owning-family’s stake in Lotte Shopping amounts to 28.67 percent. This figure goes up to 70 percent when adding stakes held by affiliates and investors with special relationships to the owning family.

Lotte Shopping also stands in the center of the group’s cross-shareholding structure that allows the owning family to control its affiliates.

Lotte Shopping owns stakes in other Lotte Group affiliates, which include a capital firm, the fast-food business Lotteria - which then owns a stake in its credit card operation - construction, and information technology, which owns shares in Lotte Shopping.

Meanwhile, at the news of the tax audit, Lotte Shopping stock plunged 1.25 percent yesterday compared to the previous day to close at 356,500 won. Its shares closed 2.17 percent lower on the previous day.