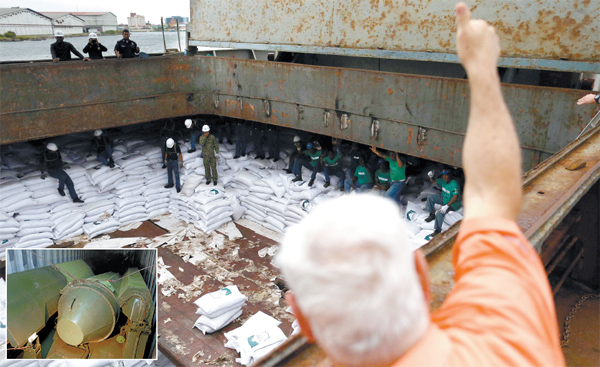 Numerous UN sanctions over North Korea’s nuclear program ban it from importing and exporting most weapons.

The suspected military equipment was found under 250,000 bags of Cuban raw sugar after North Korea’s Chong Chon Gang was stopped for a drugs inspection by Panama authorities last Friday as it approached the Panama Canal en route to North Korea from Cuba.

The ship was taken to the Manzanillo Container Terminal in Colon.

On Tuesday, Panama President Ricardo Martinelli tweeted the news of the seizure along with a picture of a green tube, which weapons experts said appeared to be an old radar system for missiles.

In a dramatic altercation, the captain of the Chong Chon Gang feigned a heart attack and then tried to commit suicide by slitting his throat as Panamanian officials attempted to search the ship. The crew resisted the search and cut the cables on cranes used to unload cargo. The crew of 35 was detained in Panama.

Cuba said later Tuesday that the North Korean ship was carrying 240 metric tons of “obsolete defensive weapons” that were to be repaired in North Korea and returned to Cuba. The agreement was to maintain its “defensive capacity in order to preserve national sovereignty,” its Foreign Ministry added.

The weapons, manufactured in the mid-20th century, were two Volga and Pechora anti-aircraft missile systems, nine missiles “in parts and spares,” two MiG-21 fighter jets and 15 engines for the planes, according to the Cuban Foreign Ministry.

The IHS Jane’s, a defense consulting firm, said in a statement Tuesday that the photo tweeted by Martinelli appeared to show a SNR-75 “Fan Song” fire-control radar for the SA-2 family of surface-to-air missiles. The fire-control radar system, developed by the Soviets in the 1950s, was commonly used during the Vietnam War. IHS Jane’s said the sugar on the ship could be payment for North Korea to upgrade the radar system. Or the equipment could be destined to be used for the North’s aged air defense network.

But the incident dashed cold water on recent moves between Pyongyang and Washington to resume contacts through the so-called UN channel in New York. A U.S. lawmaker, Florida Representative Ileana Ros-Lehtinen, said Tuesday, “The fact that missile equipment was caught being shipped from Cuba to North Korea reaffirms the dangerous threats faced by our nation due to the nefarious activities by these two rogue regimes.”

The Cuba-born congresswoman urged the U.S. to re-designate Pyongyang to be on the State Sponsors of Terrorism list, countries designated by the Secretary of State to repeatedly have supported acts of international terrorism, which Cuba, Iran, Sudan and Syria are on. North Korea was added in 1988 and removed in 2008 for meeting nuclear inspection requirements.

Panama said it will ask for the United States and the United Kingdom to send weapons experts to help identify the weapons and invite a special commission from the United Nations to determine whether the shipment violates UN resolutions.

Panama authorities said the inspection of the ship may take specialists up to a week. They are forced to move bags of sugar manually from the ship.