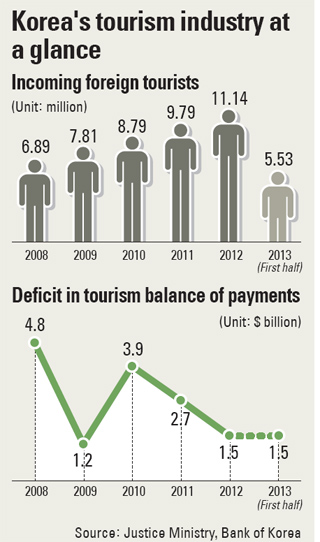 The government is rolling up its sleeves to improve Korea’s tourism industry in the middle of a boom in tourists, especially from China.

According to the Ministry of Culture, Sports and Tourism, the number of foreign tourists coming to Korea in the first half of this year was 5.53 million, up 3.6 percent on-year - and almost as many as the 6 million tourists who visited in all of 2005.

The number of Chinese tourists was 1.74 million in the first half, up 46 percent. Korea Tourism Organization data also shows that in the month of June alone, some 400,000 Chinese visited Korea, up a whopping 70 percent on-year.

Improvements in regulations and infrastructure were announced in the first Tourism Promotion and Expansion Conference hosted by President Park Geun-hye and attended by various government officials and civilian experts at the Blue House yesterday.

For starters, come January foreign tourists will get easier refunds of the value added tax they pay when shopping. They can get the refund at 13 different places in Seoul, not just at the airport. In addition, they can get refunds on the 10 percent VAT charged on their hotel bills.

“Tax revenues will drop by 50 billion won [$44,769,290] annually, but income from tourism will increase in general by about 300 billion won,” said Cho Hyun-jae, the first culture vice minister.

Attracting more tourists from China is a big goal. Starting next year, more Chinese people will be eligible for multiple-entry visas, which allow them to visit several times within a certain period. Residents of Beijing and Shanghai, as well as spouses and underaged children of Chinese who already have such visas, will be eligible.

Qualifications for multiple-entry visas for people in Southeast Asia will also be eased.

The number of Chinese eligible for multiple-entry visas will increase by about 30 million, the Culture Ministry predicts.

Other measures include: Increasing the number of wharfs for cruise ships from the current three to 12 by 2020; allowing the operation of casinos on foreigner-only cruises; allowing foreigners to purchase one condominium in Korea per year.

In addition, Koreans planning to jump into the tourism industry will get more tax benefits. When people purchase real estate to create a tourism business, they will get 50 percent off the acquisition tax. The same will happen when people buy land to build hotels within a tourism complex.