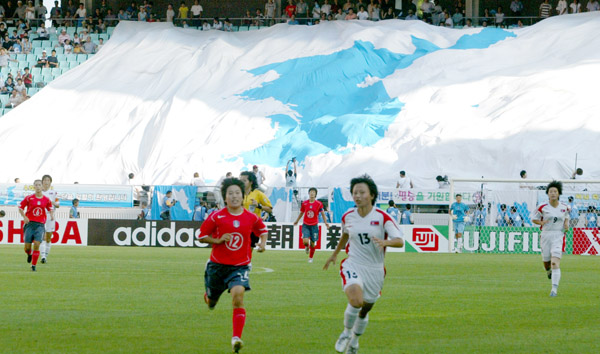 The women’s football teams of North and South Korea play a match in 2005 in Jeonju, North Jeolla. [NEWSIS]

The two Koreas are to meet in a rare football match against a backdrop of government negotiations between the two countries, aimed at hammering out a deal on a jointly-run industrial park and beginning a thaw in the frosty bilateral relations.

The North Korean women’s national football team will arrive in the South today via Beijing to participate in the 2013 EAFF East Asia Cup. It’s been eight years since they last participated in the event, and hopes are high that the match could be a catalyst for better cross-border relations.

A total of 21 players will arrive at Incheon International Airport, along with 15 North Korean officials, to attend the regional championship in Seoul and Gyeonggi from July 20 to 28. All of the matches will be broadcast exclusively on JTBC.

The timing has drawn attention from both the public and politicians in the South, as the two countries are in ongoing negotiations over reopening the Kaesong Industrial Complex. The joint business park was unilaterally closed by Pyongyang in April amid heightened military tensions.

Sports diplomacy has followed in line with political affairs on the Korean Peninsula. In October 1990, the two nations revived the Gyeong-Pyong Football Match, a competition held in Seoul and Pyongyang between Gyeongseong FC (now Seoul FC) and Pyongyang FC, which started in 1929 as a protest against Japanese colonial rule. The match was interrupted in 1946 when Korea was split as cold war tensions began.

The revival of the historic matches came amid a conciliatory mood on the Korean Peninsula with the collapse of the Soviet Union in the late 1980s. In September 1990, just a month before the competition, the Koreas had two rounds of high-level talks to prepare for the North-South Basic Agreement, which they signed in 1991.

Inter-Korean sports interactions grew until the early 2000s. Right after the 2000 inter-Korean summit between then-leaders Kim Dae-jung and Kim Jong-il, athletes from the two Koreas appeared together for the first time at the opening ceremony of the Sydney Olympics, holding a flag bearing an image of the Korean Peninsula, not their own separate national flags.

Until 2007, athletes from both countries attended opening events of several sports events together, and cross-border business and contact was vibrant during the period.

Most sports interactions halted between 2007 and 2012 during the Lee Myung-bak administration, which took a strict stance in dealing with Pyongyang due to the two military clashes - the sinking of the South Korean Navy corvette Cheonan and the North’s deadly shelling of Yeonpyeong Island.

As one of the four nations to make it to the final of the East Asian Cup, North Korea will have three matches. They play South Korea on July 21 at the Seoul World Cup Stadium in Sangam-dong, Japan on July 25 at Seoul Olympic Stadium, in Jamsil and China on July 27 at the Hwaseong Stadium in Gyeonggi.

They will head home on July 28.