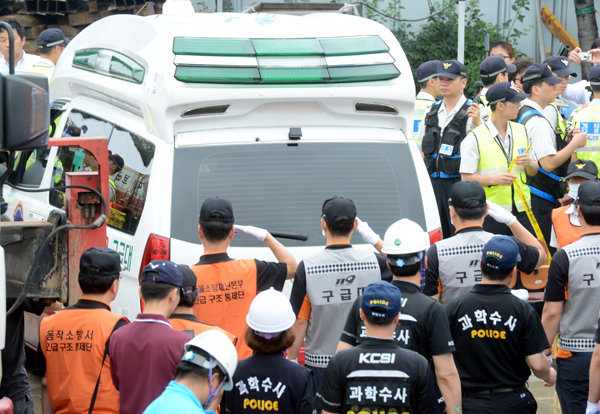 Rescue workers salute an ambulance yesterday in Noryangjin, southwestern Seoul. It is carrying the body of one of six workers who were swept away while replacing pipes under a Han River swollen from heavy rains. [NEWSIS]

Rescuers have retrieved the body of one of the six workers who were swept away when the waterworks construction site they were working on under the Han River suddenly flooded.

Park Myeong-chun, 47, a Chinese daily worker, was found in a drain tunnel link to the Noryangjin Reservoir at around 7:50 a.m., some 40 hours after the accident occurred.

Park is the second confirmed fatality after Cho Ho-yong, 59, who died en route to hospital after the accident. Five remain missing.

An eighth worker, Lee Won-ik, 40, survived. The builder, Chunho Construction, initially denied that eight people had been dispatched to the site but late on Tuesday evening, Dongjak Police Precinct officers confirmed media reports that there were indeed a total of eight workers on the team. Lee claims they were given no evacuation warning despite the fact that the Han was rising.

“There was no warning from the builder, which is supposed to be in charge of managing workers’ safety concerns,” Lee told reporters after being questioned by the police. “I stayed in accommodations provided by the builder on the day the accident occurred.”

On Monday evening, water released from the Paldang Dam caused the level of the Han to suddenly rise about 50 centimeters (1.6 feet) higher than an open-topped drain tunnel located near Hangang Hyundai Apartment complex, and about 60,000 tons of river water rushed in. It poured through the 1.4-kilometer (0.86-mile) tunnel, surprising the workers who were down there replacing old water pipes.

Seoul Mayor Park Won-soon yesterday visited the scene of the tragedy and promised the families of the victims a full inspection into the Office of Waterworks, and Chunho Construction and its subcontractors.

“We sincerely apologize that we couldn’t save the lives of the workers,” Park said. “We will run our own inspection to find out every improper measure taken by city government officials and the construction company. It is absolutely unacceptable for any reason that the builder tried to cover up that there was a survivor.”