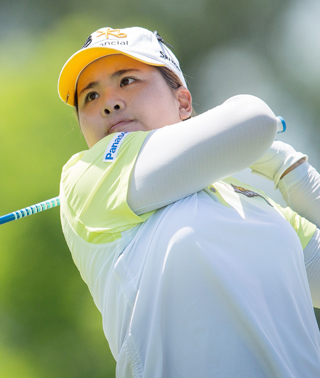 SYLVANIA, Ohio - Gone is the Jamie Farr name atop the marquee.

Even though it’s now the Marathon Classic for the first time in its 28 years - and the actor who played the cross-dressing Corporal Klinger from M*A*S*H has stepped into the background - a major drawing card for some of the LPGA’s finest players remains unchanged.

“When I first came here to Highland Meadows, I thought this was a tough golf course,” Park In-bee said. “But it seemed like everybody was scoring so low out here that I couldn’t keep up with them.”

When the No. 1 player in the world - and winner of the first three women’s major professional championships this year - thinks she’s being lapped by so many birdie-happy adversaries, that’s saying something.

The course in suburban Toledo, not far from the Michigan-Ohio state line, has been the site of some of the best rounds in LPGA Tour history.

A 20-year-old rookie named Pak Se-ri put up a 61 in 1998 while winning her first of a record five titles at the course. Paula Creamer had a 60 in the first round five years ago to cruise to a victory. And rookie Ryu So-yeon shot a final-round 62 to come off the pace to win last year.

Over the last six years, the winners are a combined 103-under par.

“It’s a golf course that once you feel comfortable, you do play very well out here,” said Creamer, who followed up her career-low 11-under 60 with a ho-hum 65 and then coasted to a two-shot victory.

The galleries have become used to players going low. Maybe too used to it.

Locked in a four-way, all-Korean tie for first heading into the final round a year ago, Ryu pulled away with a string of birdies.

“After I made six birdies in a row, the next hole I made par and the spectators’ faces were like, ‘What’s the problem with her? Why did she have a par?’ ” Ryu said with a smile.

Park recognizes that this might not be exactly the track to fit her game. She believes she is at her best on courses where par is a good score, not where fans are disappointed by one.

“I consider myself a very good player in major championships where the challenges come into play,” she said. “Some people like very-low-scoring golf courses and some like tough golf courses.”

She’s in the latter camp. Still, she has improved every year she’s played in northwestern Ohio, going from a missed cut to a tie for 25th, to sixth to a third-place finish last year.

This year’s field includes seven of the top 10 and 17 of the top 25 on the LPGA money list, including Yani Tseng, Choi Na-yeon and Angela Stanford.