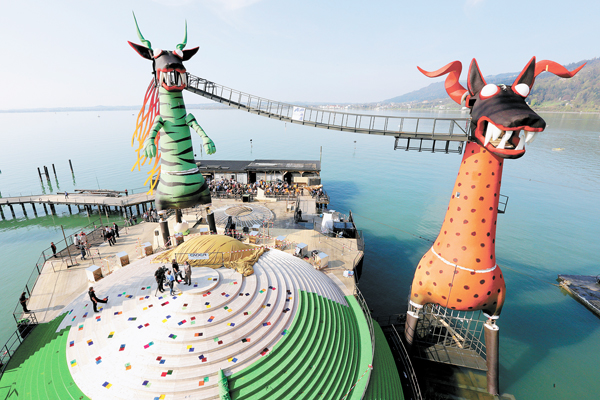 Staff members for the Bregenz Festival in Austria setting up a stage for the opera “The Magic Flute,” which will be broadcast in Korea tomorrow.[JoongAng Ilbo]

Classical music lovers who can’t afford to travel to Europe to see their favorite big-name international music festivals can now enjoy those festivals without leaving Korea.

While theaters have broadcast operas and big music events for years, now Megabox is taking the service up a notch, showing concerts nearly live, just a few hours after their actual performance. For the next several weeks, Megabox will show concerts from Austria’s two renowned summer festivals, the Bregenz Festival and Salzburg Festival, coming just hours after their live performances.

Beginning tomorrow at 8 p.m., you can catch Mozart’s “The Magic Flute” - featuring some particularly impressive staging - at six Megabox locations, including the Coex in southern Seoul, Mok-dong in southwestern Seoul and Shinchon in western Seoul.

Performances from the Salzburg Festival will be broadcast at 10 theaters across the nation, in Seoul, Daejeon, Daegu, Gwangju and Busan.

“I really hope our effort to develop more content that can be shown and heard at theaters thanks to advanced IT technology contributes to creating some pleasure for audiences,” said Lee Yul-gu, manager of video technology at Megabox and the person responsible for the concerts.

Jasmine Na-kyung Choi, the first Korean to have been appointed principal flautist for the Vienna Symphony Orchestra, says that she feels proud to know the orchestra’s performances will be attracting wider audiences.

“The other members of the orchestra were very pleasantly surprised,” said Choi. “For the Korean fans who will be watching the same stage at the same time, I will try to provide more beautiful music.”

The theater chain has been striving to enable more of its theaters to broadcast live events.

“We have installed additional transmission facilities and upgraded the video and sound systems to show this festival,” said Kim Jin-seon, an executive at Megabox. “We will endeavor to show more major festivals across the world more vividly.”

Despite the tight turnaround, Megabox is even able to subtitle the operas, to help local audiences understand the stories better.

Tickets to the classical concerts are more expensive than regular movies. For adults, tickets cost 30,000 won ($26.64), while teenagers get a 50-percent discount.