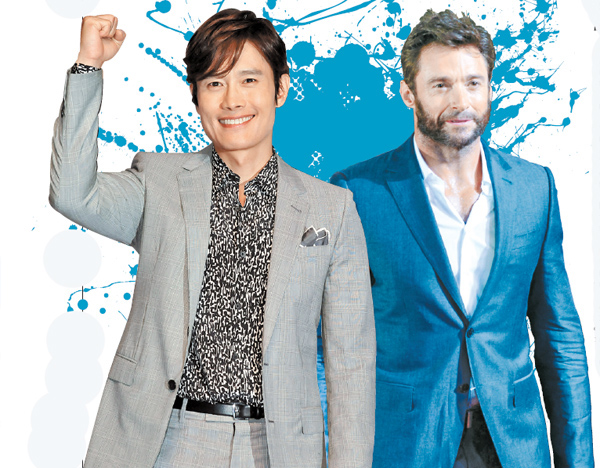 Lee Byung-hun, left, who has been making his mark in Hollywood for the past few years, is starring in “Red 2.” Hugh Jackman, right, is starring in “The Wolverine.” Provided by All That Cinema and Young Fine

Hugh Jackman and Lee Byung-hun. What do the two have in common? A whole lot, actually.

Apart from starring in two of summer’s most anticipated films “The Wolverine” (Jackman) and “Red 2” (Lee), the two are similar in age - Jackman is 44, Lee is 43, both are possessors of rock-hard abs, and right now they are starring in their most meaningful movies.

Of course, the Korean factor that comes into play has won them fans here.

As a Korean national, Lee has been making his mark in Hollywood the past few years, spreading Hallyu far and wide. Then there’s Jackman, an honorary ambassador for Seoul, who gushes about Korea every chance he gets.

On Monday, on his fourth visit to the country, Jackman met with press from all around Asia, having touched down in Seoul the night before on the “The Wolverine” world tour.

The journalist-friendly star emerged from behind the curtain in theatrical splendor and was quick to apologize for the promo trip which excluded other parts of Asia. “They only let me go for a short amount of time,” said Jackman, citing the filming of the latest “X-Men” installment as the reason for the condensed tour and the fuzz on his jawline.

And down he got to business, answering questions as Hugh, Logan and Wolverine. The three names were interchangeable and after 13 years and 6 movies, it seemed fitting.

“I think I’m probably enjoying it more than ever,” he said, attributing his age to being suited to play a character who is 200-300 years old.

“It’s hard to believe that I’ve had this incredible role for so long,” said Jackman, adding that it was exciting to be promoting “the first movie [in the series] not to have X-Men attached to the title.”

Describing the movie that is based in Japan as “the closest depiction” of the comic that he picked up some 13 years ago, Jackman said that for him, Wolverine was interesting “not because of his claws, or his healing ability but his human side … that is, his berserk rage.

“What fuels him is actually very human - what causes that is pain, loss, loneliness and the burden of being who he is for the past 200 years.”

The man who is synonymous with the “claws” said that playing the angst-ridden character is actually therapeutic.

“I get all my anger out. I’m very nice and calm when I get home,” he joked. But Jackman makes it look all too easy. He doesn’t draw attention to the pain and the sweat that is behind each installment of playing the hero with a killer body.

At first, he cut himself many times, and even his co-star, too - a double for Mystique who once ran around screaming, “Wolverine stabbed me.”

Again, in the new movie, the element of danger was there. They used real knives and Jackman said they could do this because his co-star, Hiroyuki Sanada, whom he battles, is so skilled at martial arts. “Thankfully, he didn’t know I wasn’t nearly as good as him,” he said.

And on looking good, Jackman also maintains a humble front. Having undertaken a punishing exercise regime and going on a 5,000-calorie diet to bulk up. The Australian said that people who thought he was attractive did so because they didn’t see him “at the gym at 4 a.m. You’ll see a very different side of me.”

But Koreans seem to disagree with him. And the feeling is reciprocated. On his honorary ambassadorship in 2009, Jackman said he felt an affinity toward Korea and that his trips were “never long enough.

“It’s the only nation in the world I can go out for dinner and still be on my Wolverine diet.

“As a nation, you should be the strongest superheroes in the world,” said the star.

And maybe he was hinting at a certain Korean in his remark. Hollywood may agree with Jackman, after watching Korea’s pride and joy, Lee, starring in his third Hollywood film, “Red 2” which was released here yesterday, and will follow suit in the U.S. today.

At a preview screening, 70 percent of the viewers agreed that the assassin Han, played by Lee, was the most intriguing character, which sees a star-studded cast playing retired CIA agents.

If Jackman is synonymous with “X-Men,” then Lee is slowly but surely making a name for himself as a charismatic Asian assassin in Hollywood blockbusters.

Also speaking to the press on Monday about his latest and “most meaningful work,” Lee said that he felt “like I was dreaming,” working with John Malkovich, Anthony Hopkins and Bruce Willis.

And on his part as a villain with a conscience, Lee said that Han, like his previous character Storm Shadow in “G.I. Joe,” was an unlikely, unpredictable killer, which was why he was attracted to the role. And on crafting his character, Lee said he channeled the ghost of a character he played in the hit Korean film “The Good, The Bad, The Weird.”

“The director (Dean Parisot) said he wanted Han to be a baddie with a distinct personality and that he enjoyed ‘The Good, The Bad, The Weird,’ because Park is a baddie unlike any he’d seen before.”

Lee said that even with his character figured out, working with a foreign cast was hard work.

“Before a big action sequence, from 10 days ahead I’d start rehearsing so that I’d perform well. Then Willis would just show up on the day, get stuntmen to act it out then change it all. That was frustrating,” said Lee. Then there was the famous torso scene in which nearly every muscle on his impressively-cut body is seen.

“In all of my three Hollywood movies, there’s always a shirt-off scene. I don’t know why - I guess I’m destined to suffer,” said Lee, who felt the pressure mounting when he read in the script, “Han took his shirt off and he had a perfect physique.”

And it’s not just with his body that he’s left his mark in the movie. For Korean fans, there’s some intermittent Korean words - mostly cussing - to entertain.

“As a Korean, no matter whether you live in the U.S., Japan, or China, I think in an instinctual moment, you revert back to cussing in your mother tongue,” said Lee on his stroke of ad-lib input that so impressed Parisot, that he was encouraged to do more. And as much as he loves and admires Willis, Lee will have you know, “he certainly wasn’t any help in coming up with the Korean script.”