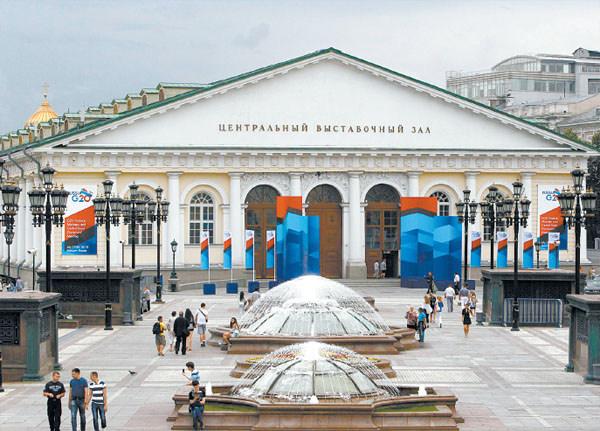 The Manezh Exhibition Center in Moscow is the site of this week’s meeting of G-20 finance ministers. [REUTERS/NEWS1]

It has been nearly five months since Hyun Oh-seok, the finance minister and deputy prime minister for economy, took office with ambitious goals to revive the economy, but he is now under fire for a lack of leadership and sluggish economic performance.

Hyun’s quiet personality and composure have been put on the chopping block since the launch of his economic team. Criticism of his muted leadership is getting louder as politicians start to speak out about the economy, asking, “Where is the deputy prime minister?”

Recently, some lawmakers of the ruling Saenuri Party publicly denounced the Park Geun-hye government’s economic policy chief for being complacent about the current economic situation rather than demonstrating leadership.

At a meeting of the party’s leadership on Wednesday, lawmakers Kim Moo-sung and Chung Mong-joon criticized Hyun and his economic team for weak leadership that is aggravating economic conditions.

“Many say leadership is absent in the current economic team,” Kim said. “The economic chief should demonstrate his leadership to the general public, but we hardly see it.”

“Advanced countries are reforming welfare policies, the public sector is worried about worsening economic conditions, and they are struggling to reduce national debt and ease regulations on businesses,” Chung said. “Korea is going in the opposite direction from advanced economies.”

What makes politicians particularly anxious about the economy is a significant shortfall in tax revenue.

“Since the president resurrected such an important position of deputy prime minister to strengthen the economy, Hyun should take bolder action in setting the economic agenda and persuading legislators,” Choi told the JoongAng Ilbo. “The ruling party is fed up with Hyun’s incapable leadership in the country’s economic control tower.”

Politicians and policy makers were skeptical about the nomination of Hyun, who was president of the state-run Korea Development Institute during the Lee Myung-bak administration, since he had no experience in making policy.

Experts also have turned their backs on the minister, saying he lacks a sense of urgency.

“It is insane to say the economy is improving while consumption and investment indices are falling,” said Sung Tae-yoon, an economics professor at Yonsei University. “The minister has worsened market conditions by failing to cooperate with the central bank and has aggravated the housing market by postponing the acquisition tax issue.”

Sung criticized the finance minister for blindly following the economic forecasts of the Bank of Korea.

“Most of all, a deputy prime minister should be able to set a long-term vision and short-term measures, but he is able to do neither,” the professor said.

Meanwhile, Hyun said politicians want radical policies that might have unintended side effects.

“They want something wild, but radical policies would only have side effects at the moment. It is better to review previous policies and their effects.”

Meanwhile, officials at the Ministry of Strategy and Finance seem to be surprised at the criticism from political circles.

“It has been only three months since we started our work,” said one ministry official. “The politicians are being impatient.”