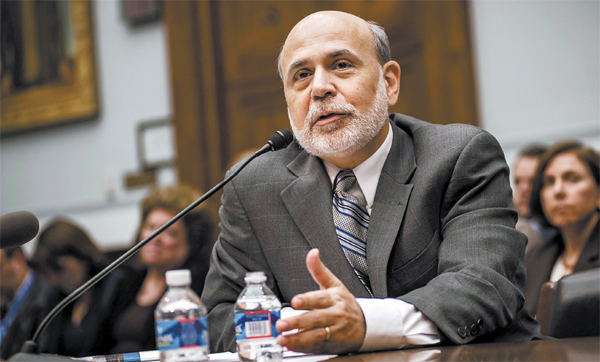 Benchmark yields traded near their lowest in two weeks after Bernanke said Wednesday the U.S. central bank’s bond purchases could be reduced more quickly or expanded as economic conditions warrant. The yield difference between U.S. government debt due in a decade and 30-year Treasuries widened to the most in almost a month as expectations for inflation that erodes the value of longer-term bonds climbed to a six-week high.

“Bernanke was thinking really about how he could calm the markets,” said Kazuaki Oh’e, a debt salesman in Tokyo at CIBC World Markets Japan, a unit of Canada’s fifth-largest lender. “He didn’t forget to mention he will continue easy monetary policy, even if he stops purchasing assets,” Oh’e said, adding that he sees the 10-year yield climbing toward 2.8 percent by year end, though not exceeding 3 percent.

Treasury 10-year yields were little changed at 2.48 percent as of 6:48 a.m. in London after touching 2.46 percent yesterday, the lowest since July 3. The rate declined nine basis points in the previous three days. The price of the 1.75 percent security maturing in May 2023 was 93 5/8. The rate on 30-year government bonds was little changed at 3.57 percent.

Government debt across Asia advanced, with the 10-year Japanese government bond yield declining to as low as 0.805 percent, the least since June 19. The rate on similar-maturity Australian sovereign notes touched 3.65 percent, the least since June 20. The yield on Singapore government securities due in a decade fell seven basis points to 2.44 percent, data compiled by Bloomberg and the country’s monetary authority show.

The Fed could keep buying bonds for longer if “financial conditions - which have tightened recently - were judged to be insufficiently accommodative to allow us to attain our mandated objectives,” Bernanke said yesterday in testimony to the House Financial Services Committee.

The Fed chairman was “relatively dovish” in his outlook on the U.S. economy and monetary policy, according to Mohamed El-Erian, chief executive officer of Pacific Investment Management. Markets “took the tapering too far,” El-Erian, also co-chief investment officer with Pimco founder Bill Gross, said in an interview yesterday on Bloomberg Television.

Yields on 10-year U.S. notes may drop to 2.2 percent this year, El-Erian said. The rate will probably climb to 2.62 percent by year-end, according to the weighted average forecast in a Bloomberg survey of economists. Treasury 30-year yields may rise to 3.67 percent, a separate poll shows.

The difference in yield between 30-year notes and similar-maturity Treasury Inflation-Protected Securities, a measure of trader expectations for inflation over the life of the debt called the break-even rate, was at 2.28 percentage points, set for the highest close since June 4. That compares with an average of 2.42 percentage points in the past year.

At their most recent meeting last month, members of the Federal Open Market Committee decided to maintain purchases of Treasuries and mortgage-backed securities at a rate of $85 billion a month as part of a policy known as quantitative easing, and kept the central bank’s benchmark rate at between zero to 0.25 percent.

As of Wednesday, investors saw a 40 percent chance policy makers will raise the federal funds rate to 0.5 percent or higher by the end of 2014. That compared with 53 percent odds on July 10, according to data compiled by Bloomberg.

“The inconvenient truth is that tapering does tighten financial conditions,” Julia Coronado, chief economist for North America at BNP Paribas in New York and a former Fed board staff economist, wrote in an e-mail to clients yesterday. “The risk to financial markets is that folks at the Fed still believe that they can effectively substitute an emphasis on their commitment to zero rates for actual QE.”

First-time claims for jobless benefits in the U.S. probably fell to 345,000 in the week through July 13 from a two-month high of 360,000 in the previous period, economists surveyed by Bloomberg News said before yesterday’s report.