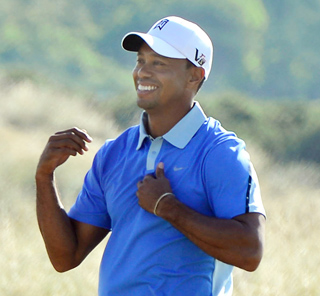 Tiger Woods on the 14th fairway during a practice round at Muirfield Golf Club, Wednesday.[REUTERS/NEWS1]

GULLANE, Scotland - Tiger Woods will start the 142nd British Open at Muirfield on Thursday as favorite to win his 15th major title but the odds on the world No. 1 are in double figures for the first time in 13 years.

Defending champion Ernie Els is 25-1 to retain the title at a course where he lifted the Claret Jug 11 years ago and U.S. Open winner Justin Rose is 20-1 to become the first English winner of the tournament since Nick Faldo in 1992.

Woods, the American who has not won a major for five years, is excited by the challenge of playing the course in fine weather conditions, a sharp contrast to 2002, when his hopes at Muirfield were scuppered by a third-round 81 in driving wind and rain.

“I’m looking forward to it,” he said. “What a fantastic championship on one of the best venues.

“It’s playing really fast out there. The golf course has got a little bit of speed to it and I’m sure it will get really quick by the weekend so the golf course is set up perfectly.”

Woods said he was feeling very good about his form.

“I’ve had a pretty good year so far, won four times even though I haven’t won a major,” he added.

“It’s just a shot here and there. It’s making a key up-and-down here or getting a good bounce here, capitalizing on an opportunity here and there. That’s what you have to do to win major championships.”

Els, 43, rolled back the years at Lytham 12 months ago, taking advantage of Adam Scott’s meltdown over the closing holes to seal his fourth major championship.

“I just feel this is a great golf course,” the South African said. “It reminds me a little bit of Lytham.

“Obviously, last week I didn’t make the cut at the Scottish Open, but I’ve had some extra time coming into the event and feel quite good about my game. I’m striking it nicely.”