Homes for auction at 13-year high

Homes for auction at 13-year high 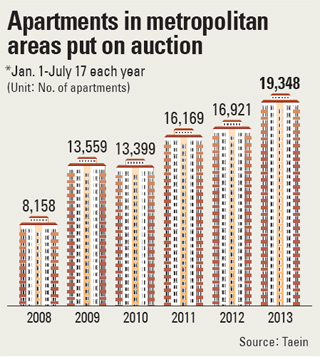 The number of apartments up for auction in Seoul and its metropolitan areas is at the highest level in 13 years, according to a real estate auction information provider Taein.

Market observers said the surge in apartments for auction is largely due to an increase in households that relinquished property because they were unable to make mortgage payments.

“The fact that the number of non-foreclosure auctions increased, while foreclosure auctions shrank means that more households gave up their apartments after failing to pay back mortgages,” said Jeong Dae-hong, an employee at Taein. “The government has rolled out various measures since last year to help the house poor stay afloat, but they seem to be ineffective given that more apartments are on the auction market.”

“House poor” refers to people whose debts outweigh the value of their property and are unable to repay their mortgages.

According to data from the Financial Services Commission, an estimated 3.22 million debtors have loans from multiple institutions, while there were about 98,000 house-poor households as of March 31.

As of the end of March, debt stood at 961.6 trillion won ($855.5 billion). Although this is a slight decrease from the record of 963.8 trillion won posted in the fourth quarter last year, experts say that at the current pace, even with banks more conservative in their lending, household debt will surpass 1,000 trillion won soon.

“When the government announces a second round of real estate stimulus measures in the future, it needs to center on rolling out policies that will revive housing sales,” said an industry insider.

The government’s April 1 real estate stimulus package offered tax breaks for home buyers by waiving capital gains taxes on homes that are worth up to 600 million won or smaller than 85 square meters (914.9 square feet). Experts have said the housing market will likely fall further without additional stimulus measures.