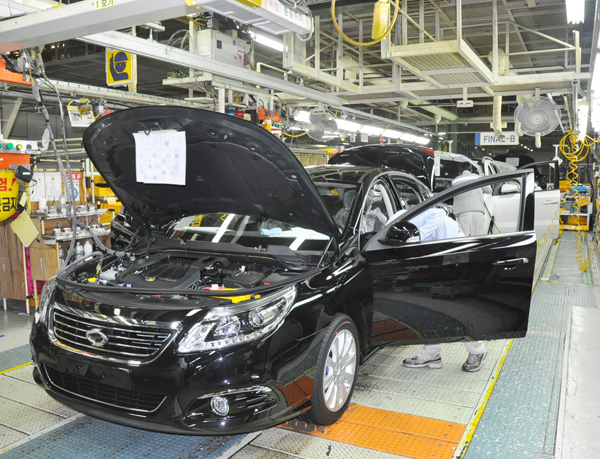 Renault Samsung Motors workers assemble a vehicle at Busan plant. On Wednesday, the company resumed overtime work for the first time this year. Provided by the company

Management and union negotiators announced the agreement July 8, and it was approved by 51.5 percent of union members in a vote held last Friday.

The agreement includes freezing wages, stabilizing the two-shift system, contract-signing bonuses, incentive bonuses of 500,000 won ($440) to 1 million won and requiring workers to use 18 days of their vacation time when the factory is not operating.

In addition, the automaker resumed overtime work in Busan on Wednesday for the first time since December.

Employees can now work an additional hour per shift.

Currently, RSM operates the Busan plant on two eight-hour shifts, and the additional two hours of work will increase production by 80 cars a day, according to RSM.

The company said the resumption of overtime is due to the successful launch of its SM5 TCE, a high-performance version of its popular midsize SM5 sedan, and overseas demand for its only SUV model, the QM5.

RSM this year will introduce a small SUV, the QM3, also known as the Renault Captur, and its first electric vehicle, the SM3 Z.E., in October.

The automaker sold 58,705 units worldwide in this first half of the year, off 29.3 percent from a year ago.