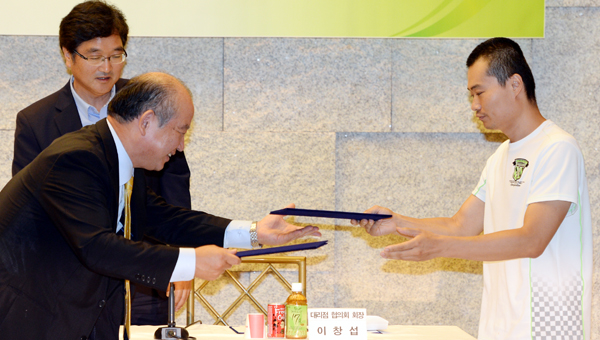 Namyang Dairy, which hit the headlines in May for bullying mom-and-pop shops that sell its products, said yesterday it settled the problem by reaching an agreement with the council of distributors yesterday.

The CEO of the nation’s leading dairy producer, Kim Woong, performed a public mea culpa and proclaimed the company “reborn.”

“We will reflect on our misconduct of the past and put further efforts into becoming an exemplary company that shares growth [with retailers and suppliers],” said Kim in a joint declaration with the distributors of its products.

In early May, Namyang had public opinion curdle on it after a recording went public of a young Namyang salesman bullying an older retailer into buying more products with abusive and foul language.

The company was also accused of manipulating an online ordering system to make stores take two to three times the amount of products they actually needed.

Kim said yesterday at a joint press conference held in Jung District, central Seoul, that the two sides have adopted a joint declaration over the “rebirth” of the company into a much fairer entity.

“Since last June, we have restored trust between each other after fixing unfair business practices,” the joint statement said.

“We appreciate the public for giving us an opportunity to fix wrongdoings of the past and to reflect on ourselves through this harsh lesson.”

Representatives of both sides will be on the committee.

The compensation amounts will be decided within two months.

In addition, both sides said they will continue to seek ways to encourage “shared growth” by starting a shared growth committee.

“We have confirmed the sincerity of the company’s commitment to eradicate unfair business practices,” said a spokesman for the distributors.

“Also, since the distributors also suffered from declines in sales due to the scandal, we decided to cooperate with each other,”