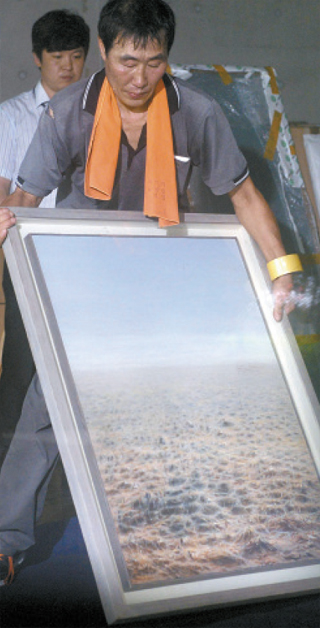 Prosecutors confiscate a framed artwork from a publishing company owned by Chun Jae-kook, eldest son of former President Chun Doo Hwan, in Paju, northern Gyeonggi, yesterday. The ex-strongman’s family is being investigated to hunt down any of his hidden assets.[NEWSIS]

The eldest son of former President Chun Doo Hwan emerged as a prime target of an ongoing investigation to hunt down hidden assets of the former strongman to pay a massive fine against him.

Prosecutors are going after the extensive art collection and an overseas shell company of the son, Chun Jae-kook.

According to sources at the prosecution, a man suspected to be the asset manager of Chun Jae-kook will soon be summoned for questioning. The man is a Korean national in his 60s with the surname Kim and he is suspected of managing the accounts of a shell company the son allegedly created in 2004.

The prosecution said it has yet to track Kim down.

The former president’s eldest son created a shell company in the British Virgin Islands in July 2004. Some details about the company, Blue Adonis, were revealed last month when the Korea Center for Investigative Journalism made public information about Koreans who owned companies in tax havens.

Chun Jae-kook was registered as the sole director and exclusive shareholder of Blue Adonis.

Kim is suspected of managing the Blue Adonis’ account with the Arab Bank.

Starting with a surprise raid on the former president’s home on Tuesday, a special team from the Seoul Central District Prosecutors’ Office has stepped up efforts to uncover hidden assets of Chun Doo Hwan to collect a punitive fines imposed on him in the 1990s.

The former military strongman ruled the country from 1980-88 and was convicted in 1997 of accepting bribes and running slush funds during his presidency. He was ordered to pay 220.5 billion won ($196 million) in fines, but he still has an outstanding balance of 167.2 billion won and has said he doesn’t intend to pay any more.

The prosecution suspects Blue Adonis is linked to the former president’s hidden assets because of the timing of its opening. Chun Jae-kook created the company only five months after his younger brother was arrested for managing 16.7 billion won of secret funds.

Prosecutors yesterday continued their raids of homes and offices linked to the Chun family for the third consecutive day. Teams of investigators were sent to 13 locations.

According to prosecution sources, the Chun family - including the former president, his wife and their children - is barred from leaving the country. Prosecutors were also investigating Chun’s relatives, in-laws and confidantes.

Prosecutors were also examining artwork confiscated from the Chun family. If the prosecutors can prove that the money to purchase the expensive art came from the former president, the government can confiscate it, auction it off and use the money to pay against the outstanding fine.

According to sources, about 550 pieces of art were seized in this week’s raids and most came from sites linked to Chun’s eldest son. The collection was mainly composed of pieces by Korean artists and antiques.

Chun Jae-kook was particularly involved in the purchases of art, the sources said. Art books are an important part of the business of Sigongsa, the publishing company he owns.

In the 1990s, Chun Jae-kook operated an art book gallery and cafe called Artinus near Hongik University. He also opened the Center for Art Studies in 1994 and supported art historians and researchers at home and abroad.

The prosecution, in cooperation with the National Tax Service, is also looking into insurance products purchased by the Chun family.

The prosecution sent a letter to the Korea Life Insurance Association last month to seek its cooperation. Insurance companies, however, are required to protect the information of their clients unless a court issues a warrant.

While the insurance companies refused to comment to the media about the requests citing the privacy of their clients, speculation grew that the prosecutors went after them with sufficient grounds. It is rare for investigators to analyze insurance policies to find financial assets because uncovering hidden wealth is normally focused on bank transactions and purchases of other financial products such as bonds and funds.