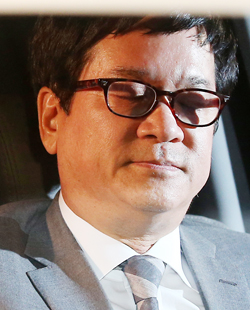 The Special Unit II of the Seoul Central District Prosecutors’ Office said at a press conference held at its Seocho-dong headquarters in southern Seoul that Lee allegedly created slush funds worth a total of 620 billion won ($550.5 million).

It said that Lee, the chief of the country’s 14th-largest conglomerate, allegedly evaded taxes and embezzled group funds totaling about 200 billion won.

Lee was detained in a 6.56-square-meter (70.6-square-foot) cell in the Seoul Detention Center on the southern outskirts of Seoul on July 1 after the Seoul Central District Court issued a warrant to arrest him.

The prosecution said the total amount of the slush funds could increase as they are still collecting evidence by cooperating with financial authorities in Hong Kong and Singapore, where CJ operated branch offices.

It said Lee had established a total of 19 shell companies including Topridge and Royston in the British Virgin Islands and opened accounts at seven banks in Singapore and Hong Kong in the names of the shell companies to manage the funds. It said Lee allegedly evaded about 56.4 billion won in taxes and embezzled about 96.3 billion won worth of CJ’s assets in Korea.

Lee is also suspected of embezzling 24.4 billion won of money from CJ’s Japan office and also costing the company about 56.9 billion won in losses by putting up a building owned by that office as collateral to borrow 44 billion won from Shinhan Bank’s Tokyo branch to purchase two buildings in Tokyo’s Akasaka neighborhood.

The investigation team suspects Lee has purchased about 300 works of art for about 140 billion won in the names of dozens of CJ employees from 2001 and 2008 from Hong Song-won, head of Gallery Seomi in Cheongdam-dong, southern Seoul. Hong is under investigation for allegedly evading about 3.5 billion won in taxes from 2007 and 2010.

There was speculation that the investigation found a list of politicians’ names whom Lee had been bribing, but the prosecution said it found no evidence of bribery by Lee.

The prosecution also proposed the government revise the real-name financial transaction law that was established in 1993. Under the law, bank customers must use their real names for financial transactions. It led to many wealthy people and corrupt politicians creating bank accounts under borrowed names to park their dirty money.

The prosecution suspects officials at the country’s major banks helped Lee create hundreds of bank accounts under borrowed names and requested the Financial Supervisory Service investigate those banks in May.

“We sincerely accept the investigation result,” the CJ Group said in a press release. “We apologize for inflicting such worries on the nation.” Sources at CJ said the group will close every shell company established in tax havens.

It is unknown whether CJ will request bail for their boss.

“We are not considering it for now,” an official of CJ told the JoongAng Ilbo. “We will see how the chairman’s health is.”