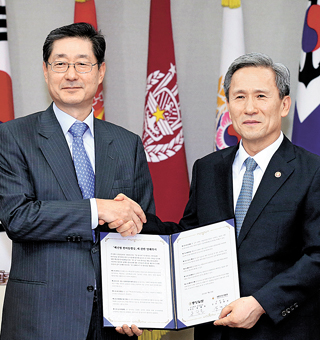 Defense Minister Kim Kwan-jin, right, and Song Pil-ho, vice chairman of the JoongAng Ilbo, shake hands at the Ministry of National Defense in Yongsan District, central Seoul, yesterday after signing an agreement on the creation of an award for Americans who have helped strengthen the military bond between the two countries. The Paik Sun-yup Korea-U.S. Alliance Award is named after Korea’s first four-star general. Now 92 years old, Paik is the oldest living Korean general from the 1950-53 Korean War, and is regarded as a hero both at home and abroad. Retired U.S. four-star general and former Commander of United Nations Command Walter Sharp has emphasized the respect he feels for Paik, calling him a patriot. The first winner will be announced next Wednesday and the award ceremony will be held on Sept. 30. By Kim Seong-ryong