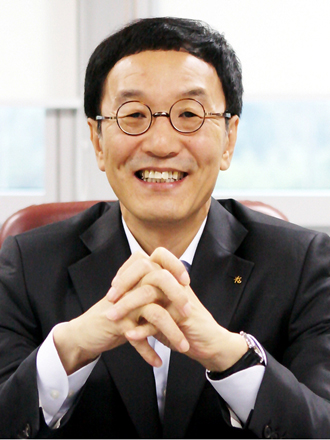 Controversy is rising in financial circles over whether the Park Geun-hye government is exerting too much influence on nominations for top financial positions following the resignations of executives that were appointed during the former administration.

On Thursday, KB Financial Group under new Chairman Lim Young-rok announced chief executive nominees for seven of 10 affiliates including the group’s bank, card and securities arms. Ever since Lim was named chairman to succeed Euh Yoon-dae, the industry has waited to see whom he would name as head of KB Kookmin Bank, the country’s largest lender.

Lee was approved by the board and shareholders yesterday, officially becoming president of KB Kookmin Bank. Chief executive nominees?for six other affiliates were also approved.

A day after the nomination was announced, however, the labor union of KB Kookmin Bank staged a protest at the financial group’s headquarters in Myeong-dong, central Seoul, and released a statement questioning Lee’s capabilities. The union said the nomination was influenced by “an outside force.”

“The nomination of Lee Kun-ho as KB Kookmin Bank president by Chairman Lim Young-rok is an example of government-controlled finance and destroys the trust [the union has with the bank],” the union said in the statement. “The control is held by Chairman Lim and other ‘Mofia’ officials behind him.”

Mofia is a portmanteau of Ministry of Finance and Mafia, and refers to a bigwig in the financial industry whose career has roots in the Finance Ministry. Lim is a Mofia: He was second vice finance minister from 2007-8. When Lim was named chairman by a special nominating committee consisting of KB Financial Group’s board of directors, there was criticism that too many former government officials were being given jobs at private financial institutions and public organizations despite the fact that they lacked operations expertise.

As for Lee, speculation has arisen that he was nominated because of a special connection with the current government. Lee formerly worked at the Korea Institute of Finance, where a senior government official also spent his career as senior researcher.

“Everyone knows that Lee was named in an unfair way supported by an unseen hand,” the union said in yesterday’s statement. “Also, Lee lacks expertise [in carrying out bank operations] considering that he joined KB Kookmin Bank only in 2011.”

The union urged Lim to withdraw the nomination of Lee or it would go on strike.

“Though President Lee has had a short career within the bank, he has sufficient understanding of current issues and the ability to present solutions [to challenges facing the bank],” said an official from KB Financial Group. “He was also selected from among 10 candidates after in-depth interviews.”

“It is nonsense to talk about [government-controlled finance]. It is a groundless rumor that a senior government official backed?me,” Lee said yesterday. “Though we do know each other from past days, there’s no way he intervened [in the nomination].”

The Park Geun-hye government, meanwhile, has been under fire for pressuring financial chiefs to step down and filling the positions with people that allegedly have ties with the current administration.

The first controversial nomination was Korea Development Bank Financial Group Chairman Hong Ky-tack, who took the baton from former chairman Kang Man-soo. Industry insiders note that Kang, a close associate of former President Lee Myung-bak, was pushed from his position. Hong was a member of the economics committee on Park’s transition team.

“We urge the Park government for no more government-controlled personnel appointments and management,” said an official of the Korean Financial Industry Union.