Journalist says economic reform a must for China

Journalist says economic reform a must for China 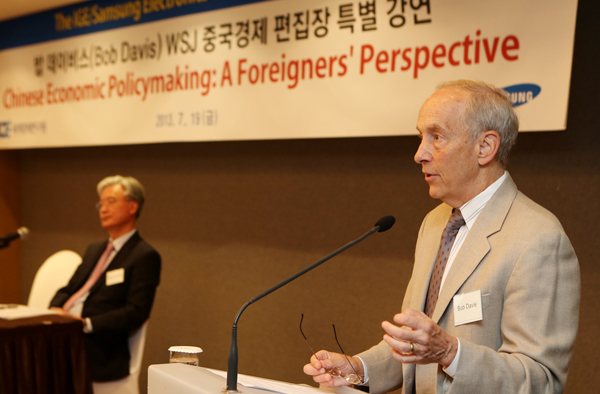 Wall Street Journal senior editor Bob Davis, right, talks about China’s economic policies and the challenges the world’s largest market faces yesterday at a lecture sponsored by the Institute for Global Economics at the Plaza Hotel, central Seoul. Provided by the institute

Bob Davis, senior editor of Chinese economy for the Wall Street Journal, says China’s economy will continue to slow unless the country reforms its economic structure, adding that China lacks the innovation capability of Korea and Japan.

“Chinese people love basketball, but they are terrible at it. It is because most basketball courts are locked up and people can’t freely play the sport and compete to be better,” Davis said yesterday in a lecture hosted by the Institute for Global Economics in Seoul. “That is the problem the Chinese government is facing in its economy now.”

Davis was part of a Wall Street Journal team of reporters that won a Pulitzer Prize in 1999 for coverage of the Asian and Russian financial crises. He was also awarded the Raymond Clapper Award for coverage of White House negotiations with China over its accession to the World Trade Organization.?

Absence of innovation is the most serious challenge China should tackle, Davis argued.

“Even though China borrowed the economic development models of Korea and Japan, they don’t have world-class innovative companies like Samsung, Hyundai and Panasonic,” he said. “These companies were forced to compete globally and have become the most innovative companies in the world, but China doesn’t have a system to make innovation.”

The main cause is the Chinese government’s control of the economy, Davis pointed out.?

“If smart government officials were asked to pick 10 promising industries in the future, they mention industries that are important now,” he said. “It’s because they are not fully informed.

“The fundamental question is the degree of the government’s lock-up on the economy.”

The Chinese government sets five-year development plans, but more important thing than just devising plans is the know-how to execute and apply them to the economic system.??

Davis called China’s development of a supercomputer a “trophy for exhibition.”

“The country said it has developed the fastest supercomputer, but that doesn’t mean it has innovative technology. It means they invested a lot of money,” he said.

“The Chinese economy is slowing more rapidly than the government expected. The wheels haven’t come off, but they have started to wobble.”

He mentioned that some market analysts predict growth of 3 percent to 4 percent for China.

“They have slow growth, but no evidence of reform yet. Whether they go back to their old ways of stimulating the slowing economy or actually go ahead with reform remains to be seen,” he said.

If China successfully transforms its export-dependent economy to a focus on the domestic market, it could maintain 6 percent growth, he said.

China has been using a catch-up strategy in order to achieve double-digit annual growth, Davis said, because it was so far behind other countries. But the rapid growth based on that strategy is coming to an end.

He suggested that one of the urgent tasks for the Chinese government is to prevent the further expansion of bad loans.

China is currently seeing real estate bubbles like the one in the United States in 2007, which led to spikes in bad loans. State-run banks are providing cheap loans for new buildings, but this could result in an oversupply in the housing market and massive losses for banks.