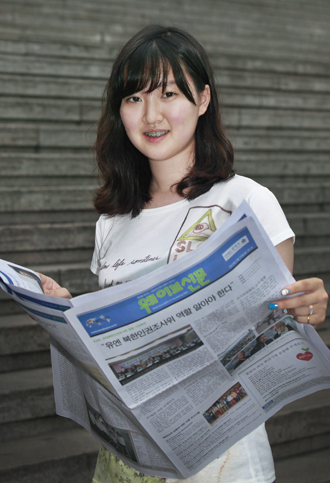 Teen magazines and newspapers tend to be filled with warm and light human-interest stories. But the student monthly “WAVE” touches on one of the most contentious issues in South Korea: Human rights in North Korea. Topics include an interview with well-known human rights activist Suzanne Scholte and a feature that follows the daily life of young North Korean defectors at a Seoul school.

At the helm of the newspaper is Park Ki-jung, the 18-year-old editor-in-chief who is currently attending Hankuk Academy of Foreign Studies in Yongin, Gyeonggi. The Korea JoongAng Daily sat down with her to discuss her experiences creating and running the monthly magazine.

Q. How did you get interested in North Korean human rights?

A. In 2011, the issue of whether the North Korean Human Rights Act should be passed in [the National Assembly of] South Korea was controversial. I wondered about the actual state of North Korean human rights and tried to dig into the issue.

At the time, the Ministry of Gender Equality and Family hosted an overseas program where students could visit various institutions to conduct their own research projects. I applied for the government-funded program and made it in. I tried to use the opportunity to better understand the state of human rights abuses. With the support of the ministry, I was able to meet U.S. Congressman Ed Royce [R-California], who has been a vocal advocate for North Korean human rights. I also visited the Han-Schneider International Children’s Foundation in Los Angeles, which supports an on-going food program for orphans in North Korea. That’s when I became involved.

Why did you decide to publish the student newspaper?

After I learned the poor state of human rights, I thought I should do my part in raising awareness. My school held an event that taught about the North Korean gulag system, and I heard visitors say they were in the dark about the horrific situation.

I thought long and hard about what might be the best way to let people know. I first thought about setting up a blog but, there is a limit to promoting such a site. Then the idea of publishing a newspaper popped up, and it seemed like the ideal means because I can go out and distribute them. So, the first issue came out in May of last year. I took on the entire task at the beginning but now there are 13 other reporters.

How many copies of the paper are circulated?

We don’t actually sell the paper but provide it for free to a wide range of schools and institutions. We print 10,000 copies and half are sent to schools and organizations. The other half are made available for our members’ events and charity performances.

How was the interview with Suzanne Scholte conducted?

When I studied North Korean human rights, I came to know that she is a well-known activist, and I dreamed of interviewing her. Our team contacted her via e-mail without many expectations but she agreed to do an interview. I think she was more agreeable because we were students.

What do you want to major in after graduating from high school?

Many people assume that I will major in journalism. I am still not sure. I am particularly interested in planning charity concerts and performances. I belong to a school band, and we have held our own concerts to raise funds for charity work. Whenever I engage in the concerts, I feel really rewarded.