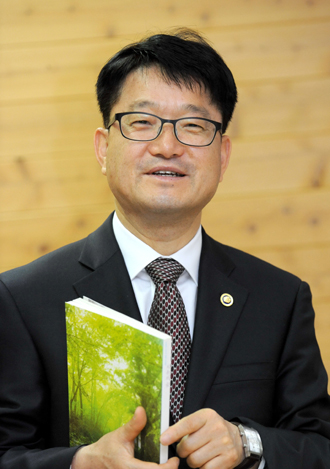 “It is my goal to promote forests as a sort of companion for everyone from cradle to grave,” says Shin Won-sop, 54, chief of the Korea Forestry Service. Ever since Shin took office in March, he has long emphasized “forest welfare,” a slogan aimed at enhancing the quality of life for everyone.

The agency announced on Tuesday the Sixth National Forest Plan.

“This year marks the 40th anniversary of afforestation in Korea. Many countries consider us one of the countries that have successfully expanded forest areas and try to benchmark us,” Shin says.

To carry out the plan, he said the forest service will spend 10.5 trillion won ($9.5 billion) through 2017 to double the number of kindergartens located in forests to 250 and expand character-building experiential centers for youth from 120 to 200. The agency also plans to set up 430 facilities, including “healing forests,” restrooms, recreational areas and resorts. In addition, 20 cemeteries will be created.

Shin emphasized the healing effects of forests. In one experiment, he had 12 people walk 274 kilometers (170 miles) over 15 days to compare their before and after heart rates. One subject had a rate of 120 beats per minute and 78 after.

Shin studied forest therapy and has been a professor at Chungbuk National University.