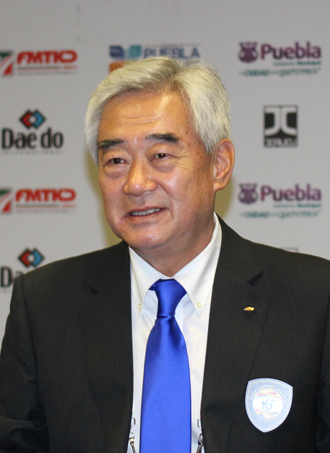 Choue Chung-won won a fourth term as president of the World Taekwondo Federation on July 15 at the General Assembly in Puebla, Mexico.

Choue, the sole candidate, retained his position without voting by unanimous consent.

Choue has presided over the organization 10 years since taking over from Kim Un-yong, who was forced to step down on bribery charges in 2004.

The 66-year-old noted in his inaugural speech that the International Olympic Committee had decided to drop wrestling from the Olympics beginning in 2020.

“Any sport cannot survive without an effort for globalization and popularization,” he said. “I will devote myself to promoting Taekwondo to be a world sport instead of a Korean sport, so Taekwondo can thrive beyond the borders of Korea.”

Choue emphasized that we should not be satisfied with Taekwondo remaining a part of the Olympics.

And he unveiled plans for dramatic changes in Taekwondo at the 2016 Summer Olympics held in Rio de Janeiro.

“Adjusting Taekwondo uniforms takes up players’ time and distracts them in matches,” he said.

“While there are lots of available cutting-edge materials for Taekwondo uniforms, we don’t need to cling to the traditional uniforms. Several manufacturers are developing clothes suitable to Taekwondo. I think the octagon ring [eight-sided shape] will allow more thrilling matches rather than the current rectangular one. Indeed, mixed martial arts has replaced a rectangular cage with an octagon-shaped cage for exciting plays.”

Furthermore, the foundation has decided to tone down terms used in matches. For instance, KO (knockout) will be replaced by another phrase like “complete win.”

And “sudden death,” meaning a winning point, will be changed to “golden point.”

The president said the foundation will put more emphasis on Taekwondo as a sport than as a form of chivalry, aiming to eschew the traditional side of it and make it more enjoyable for viewers of the Olympics.

“We should have all of the changes in place by next year at latest in order to introduce the new Taekwondo at the 2016 Olympics,” he said.

Choue graduated in economics from Kyunghee University, which was founded by his father, and earned his master’s degree in international politics at Fairleigh Dickinson University in New Jersey.

Back in Korea, he became the 10th president of Kyunghee University in 1997.