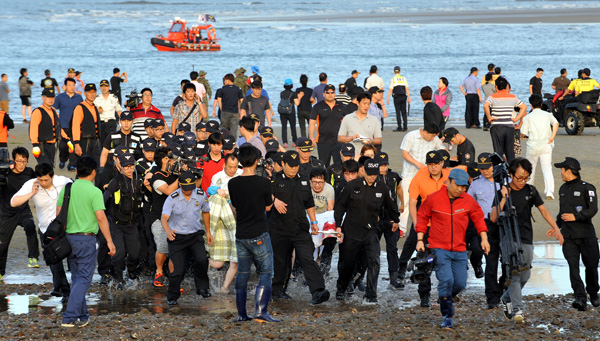 Relatives grieve as the body of one of the five teens is recovered yesterday morning at a beach in Taean County, South Chungcheong. Five high school students participating in a military-style camp were swept away at around 5 p.m. Thursday. A search team recovered all five by 7:15 p.m. yesterday. By Kim Seong-tae

A large manhunt took all of yesterday to find their bodies.

The five students were taking part in a so-called Marines Special Camp organized by a private organizer with no affiliation with the Marines Corps, along with 193 classmates from Kongju National University High School.

The school sent all junior year students to the Taean coast for a three-day military-style camp called the Marines Corps Education Center Training ahead of the summer break. 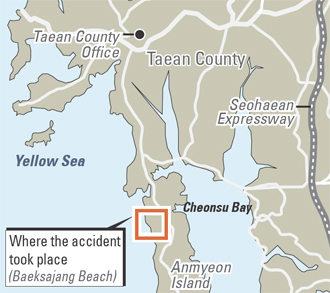 At around 5 p.m. Thursday, 90 students were taking part in a so-called sea-ground exercise with two instructors. As the first group started the exercise, 20 students were told by the instructors to walk into the sea until the water reached their waists.

But tragedy struck when a one-meter (3.2-foot) wave hit them.

“With the establishment of a special investigation team,” Hwang Jun-hyeon, chief of the West Regional Headquarters of the Korea Coast Guard, told reporters during a press briefing yesterday, “we will get to the bottom of the accident.”

The authorities found the body of one of the students, Lee Jun-hyeong, about six to seven meters above the shoreline at 6:05 a.m., which is low tide.

Lee reportedly tried to save some of his classmates struggling in the wave, according to accounts by classmates given to the JoongAng Ilbo.

The organizer of the military-style camp is now facing scrutiny. The police investigating the accident said students were instructed not to wear life vests during the sea-water exercise.

It was also reported that local residents told the camp organizer not to proceed with programs because of poor weather. Instructors acknowledged they had been warned by the residents about potential risks, according to the investigators.

“I told the instructors they should move to another place because their location had safety risks,” said a Taean resident named Yun Hyun-geun.

Sea currents at the location are so strong in the rainy season that local residents refrain from swimming, he said.

It was also reported that the local community broadcast a warning at around 4:30 p.m. Thursday, a half an hour before the accident, through speakers set up along the beach. It urged visitors on the beach to stay away from the surf as the tide was strong.

Reportedly, the two instructors in charge of the 90 students at the beach did not take part in rescue efforts, presumably because they can’t swim.

“I heard [from students] that the instructors were doing nothing but just standing there waving flags signalling for help,” a family member of one of the five students was quoted as saying by Yonhap.

Many military-style camps have sprung up in recent years. Schools send students and companies send newly-recruited employees to the camps for bonding and strengthening of group discipline. And many are not licensed by the government.

The organizers of the camp in Taean do not have certification by the Ministry of Education.

“The majority of instructors at private military camps have no experience in leading students, especially in safety measures,” said Jung Jin-ho, director of the Association of Youth Training Education Center, an industry group.