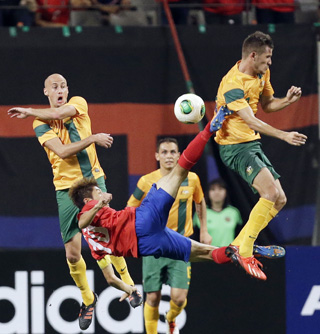 Korea’s match versus Australia ended in a scoreless draw Saturday, but Hong Myung-bo, making his debut as coach of the national team, was not too disappointed, finding consolation in a solid defensive showing.

Korea failed to capitalize on its dominant ball possession against the Aussies in the opening game of the East Asian Cup, played at Seoul World Cup Stadium, but Hong praised the team for its organic, moving defense and high-tempo offense.

“Defensively, I think they played a perfect game,” Hong said at a press conference after the match. “Of course I am sorry that we did not capitalize on our many goal chances, but we still have time and will try to improve.”

Both teams entered the four-nation competition missing many of their top players to international leagues, but the hosts made the most of who they had left. Korea pressed the visitors from early on, recording 21 shots through the game, 12 of them shots on target. Australia responded only with five shot attempts, its first not coming until 39 minutes into the game.

Korea featured a tight wall in its back four, thanks to Kim Chang-soo, Hong Jeong-ho and Kim Young-gwon. The remaining defensive slot was filled by Kim Jin-su, a left back for J-League club Albirex Niigata, who made an impressive debut for Korea, feeding effective corner kicks to the strikers and sending in long, but precise throw-ins.

On the offensive side, Yun Il-lok and Kim Dong-sub also made promising debuts with the senior side, with Yun recording four shots on target and Kim playing for the full 90 minutes.

Whatever momentum Korea achieved, however, was quickly snuffed out by Australia goalkeeper Eugene Galekovic.

Hong, who promised to bring a Korean style of football to Brazil when he took over from Choi Kang-hee at the helm of the national team last month, said he has demanded more teamwork.

“I ordered them to do the passing and ball trapping more aggressively,” Hong said. “I said to them, if it is possible, they send the ball into a spot where the opponents can find it difficult to deal with.”

Hong also said he expects the team to keep getting better. “There were only two days we could work together,” he said. “We have more time from now and it will become better.”

Korea will play China in Hwaseong, Gyeonggi on Wednesday

Kim Ho, the former Korean national coach who is now working as a football commentator for Ilgan Sports, said that one significant difference of Hong’s squad from Choi was a smaller gap between the offensive and defensive lines.

“During the final qualifiers (for Brazil), Korea had quite a gap between the offense and the defense, which caused the team to play poorly,” Kim said. “As the gap widened, they had to make long passes and that caused them to send the ball to the wrong spots.”

Kim also said Hong’s team also impressed with its quick but stable retreat to defensive positions once the ball was intercepted.

Kim, however, said that Hong’s team could have been better in its passing work, in particular passes in front of the goal. He also said the team needs to improve its crosses.