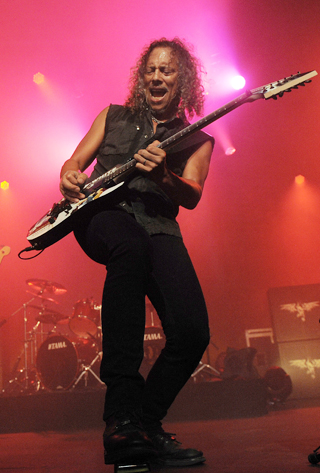 Kirk Hammett of Metallica performs on Day 3 of the 2013 Comic-Con International Convention on Friday in San Diego. [AP/NEWSIS]

SAN DIEGO - A riot in the streets, a public hanging, bloody handprints, car crashes, a police officer being drowned and giant coffins above the stage - “Metallica Through The Never’’ is not your average concert film.

It was Metallica Day at Comic-Con on Friday and the four members of the California-based heavy metal band debuted footage from their new 3D film for thousands of fans.

“The world just turned upside down,’’ drummer Lars Ulrich said as fans raised devil’s horns and shouted after the band took the stage.

Equal parts “Road Warrior,’’ “Batman Returns’’ and Metallica’s dark imagination, a preview clip of the R-rated film features a series of intentionally disturbing images crossed with concert footage that brought shouts of approval from the 7,000 fans who waited all day to get inside Hall H for the panel.

Actor Dane DeHaan plays the lead character in the Nimrod Antal film, opening Sept. 27 on IMAX screens. He’s a roadie sent on a mission to recover a broken-down truck and a secret package by the band during a concert. What he finds along the way is completely unexpected - and took DeHaan a while to process when he was handed a 15-page script that included no dialogue.

DeHaan’s journey is intercut with scenes of the band performing on a massive stage that features flames and many of the effects images the band has used over the years. Singer James Hetfield hinted the band might take the stage on tour after the film is released.

“We just take these things and run with it,’’ he said. “It’s a very edge-of-your-seat existence. When I first joined the band our first gig was San Quentin State Prison. And here we’ve got 20,000 Mexicans screaming against a chain link fence, so by the time we got to Vancouver, we were like, `We got this.’ So the whole thing over the course of the year has just been a wild ride. It’s really exciting to see it get to where it is now. It’s almost weird. Wow we’re here.’’

After more than 30 years and more than 100 million albums sold, Ulrich said the film has been a way for the band to stay fresh.

“I think increasingly what makes our band work, we have to go do all these crazy projects, these sort of edgy, left-field projects because it’s what keeps us alive,’’ Ulrich said. “Making records is great and we love it and we appreciate the fact that we can make records .?.?. but there’s also a familiarity to it. And you have a dynamic in the band of four personalities and they’re really curious and into different things and just kind of ready for whatever.’’

Asked by a fan when the band might record new music, Ulrich said the film has consumed them for two years. Once it’s out, they’ll turn to their 10th studio album: “2014 will be all about another Metallica record.’’

Musicians have made appearances at Comic-Con over the years, but none as big as the heavy metal heavy hitters, who gave a private concert for fans lucky enough to win tickets later Friday.