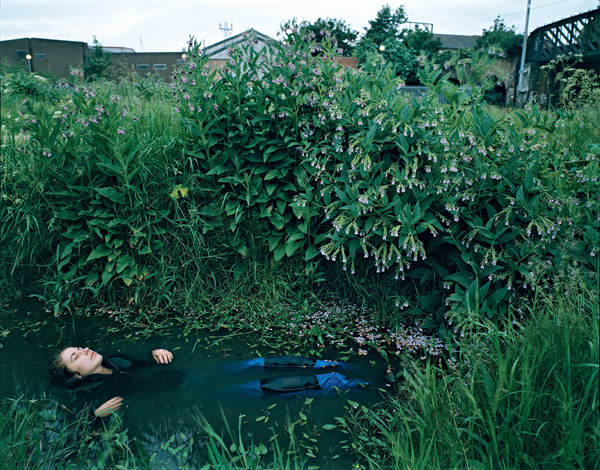 The 12th edition of the Dong-gang International Photo Festival kicked off on Friday in Yeongwol County of the mountainous Gangwon Province. The festival is one of the most successful art events held in Korea’s summer vacation spots, along with the Great Mountains Music Festival.

He added that he expected this year’s edition to attract more visitors, as it includes a special exhibition of British contemporary photographers.

“Many of the exhibits have a surrealistic ambience, which will easily arouse the public interest,” said Joanne Junga Yang, co-curator of the special exhibition titled “The Constructed View: U.K. Photography Now.”

Among the works on display at the Dong-gang Museum of Photography’s first and second exhibition halls is Tom Hunter’s “The Way Home.” Apparently inspired by the Victorian pre-Raphaelite painter John Everett Millais’s famous “Ophelia,” the photo shows a woman floating on a stream surrounded with water plants and bushes. Hunter is well known for photos that show everyday life in the compositions borrowed from the old masters.

The “Thing” series by Lee Jungjin, winner of this year’s Dong Gang Photography Award, are exhibited as part of the photo festival. Provided by the organizers

There is another photo inspired from a famous old painting among the exhibits. It is Lottie Davies’ “Lou’s Story,” which shows a scene that looks like it was taken from a mystic nightmare. The photo’s main character seems to be based on the 19th-century French painter Paul Delaroche’s “Execution of Lady Jane Grey.”

Another must-see in this festival is the solo show of Lee Jungjin, winner of this year’s Dong-gang Photography Award, in the museum’s third exhibition hall.

Among the exhibits, the “Thing” series shows close-ups of everyday objects from new angles. And the “Wind” series shows the winds visualized through the movement of trees, waves and clouds.

Another special exhibition at this year’s event is “90 years of Winter Olympics in Photography,” held to celebrate the Pyeongchang Winter Games held in Gangwon in 2018. This exhibition, ongoing at the Students’ Gymnasium, features 120 photos documenting memorable scenes from the Winter Olympics.

The festival also includes an exhibition of Korean photojournalists’ works related to the 1950-53 Korean War and its aftermath, to commemorate the 60th anniversary of the armistice agreement, in the yard of the Dong-gang Museum of Photography. There are also shows dedicated to local photographers based in Gangwon and Yeongwol County.

The festival opened Friday in Yeongwol, Gangwon, and most programs run through Sept. 22.

The county is two hours from Seoul by car, but can also be reached via express bus from the Express Bus Terminal in southern Seoul. The Dong-gang Museum of Photography is a five-minute walk from the bus terminal in Yeongwol.