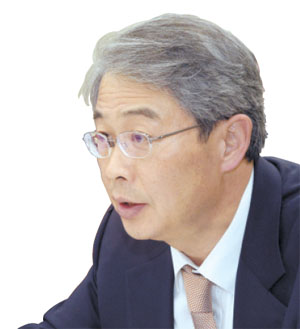 Instead of settling for the status quo, Nonghyup Financial Group employees should be determined to compete with other financial institutions, said the group’s new chief Yim Jong-yong. More than a month has passed since Yim, former head of the Prime Minister’s Office, began his term as chairman of Nonghyup Financial Group and he seems more than confident about bringing change to the financial group that has long been seen as conservative business-wise.

“Nonghyup Financial Group should look back and think whether it has been settling for basic businesses administering agricultural policy funds,” Yim said in an interview with the JoongAng Ilbo last week. Yim officially became chairman of the group on June 11, succeeding Shin Dong-kyu, who abruptly stepped down in May due to growing internal conflict with the National Agricultural Cooperative Federation, the largest shareholder.

“I will bring out the toughness that is in our employees and compete with other commercial financial institutions,” he said. “I will bring changes in Nonghyup Financial Group.”

During the interview, Yim looked much brighter than on the day of his inauguration. Back then, Shin had resigned, saying, “Even if Zhuge Liang comes, things will not work out at Nonghyup Financial Group.” Liang was one of the great strategists and statesmen during the Three Kingdoms Period in China.

According to industry sources, Shin had trouble running the business due to a conflict with Choi Won-byeong, chairman of the agricultural cooperative federation. Shin had previously said “there are too many restrictions in managing the business” because it is strictly controlled by its shareholders though the financial division of the cooperative that was spun off from other businesses like retail and distribution in March 2012. Four other executives from the federation stepped down following Shin.

“Though I’m not Zhuge Liang, I am getting along with the new executives and also Chairman Choi [of the federation],” Yim said. “I will make sure the financial group recovers its fallen credibility due to the security accident [in March] and make sure the group is given an environment where it is able to make rational decisions with the federation.”

Q. Based on what you’ve seen over the past month, what kind of an organization is Nonghyup Financial Group?

Nonghyup Financial Group is considering acquiring Woori Investment and Securities. Will that help its growth?

It will definitely be of big help. Nonghyup Financial Group is the only financial institution in Korea that runs both life and damage insurance businesses. And NH Nonghyup Bank is the industry’s fifth-largest. But our securities business is the 13th-largest in the industry, so it’s small and mid-sized and I don’t really see what our securities business is competitive at. If we purchase industry leader Woori Investment and Securities, Nonghyup Financial Group will be able to raise its competitiveness in the industry. But it should be noted that we will consider the purchase only within our capital flexibility. We will be competing with KB Financial Group and if the price exceeds our limit, we will not acquire the securities firm.