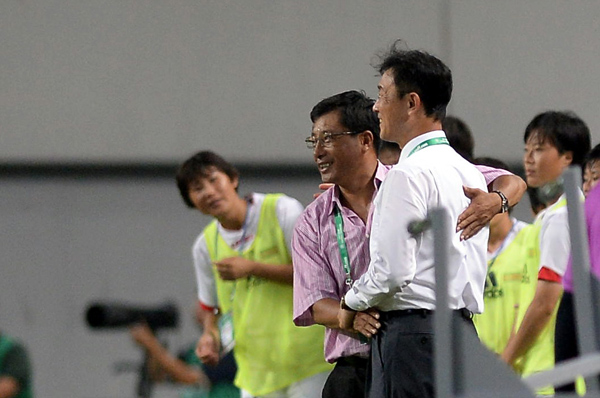 A rare encounter on the football pitch between the North and South women’s teams in Seoul on Sunday did not look like it was going to be a significant moment for inter-Korean relations. There was heavy security, the match was presented without ceremony and the players were expressionless, rarely engaging in conversation between sides.

But then, after the match at World Cup Stadium finished - with North Korea winning 2-1 - the teams’ coaches unexpectedly brightened the mood.

It turns out the two had met before, most recently in 1990 when they were both players, and the North and South men’s teams played in Seoul and Pyongyang. This was their first meeting in 23 years.

“I congratulated him for winning,” said Yoon, 52, during a post-game press conference, referring to Kim, 51, as a “friend.”

“We had a hard time in the early phase of the game,” Kim said. “I think the women’s football in the South’s side has developed much in a short time.”

The South led after Kim Soo-yun’s goal in the 26th minute, but then Ho Un-byol scored an equalizer at the 37-minute mark, followed by the game-winner two minutes later.

Yoon met Kim on the football pitch twice before that 1990 derby - at the Dynasty Cup in China in 1989 and at a qualifying match in Singapore for the 1990 Italy World Cup. But both were defenders, so rarely met head-to-head.

“I played North Korea about four times when I was a player,” said Yoon. “He is a pal, with whom I cherish a good memory.”

“His style was similar to that of Park Kyung-hoon (the head coach of Jeju United, who played as a defender for the South during the inter-Korean matches in 1990). He (Kim) was fast and good at overlapping.”

Both Yoon and Kim made the transition to coaching, although so far Kim has been more successful.

Kim has been coaching the North’s women’s team since 2004 and is considered to have created a golden era for North Korean football, producing several world stars, such as Ri Kum-suk.

Kim led North Korea to the quarterfinals of the 2007 FIFA Women’s World Cup in China and then led the team to win the Asian Cup in 2008, winning him Coach of the Year honors by the Asian Football Confederation.

“He made many efforts regarding North Korea’s women’s football,” Yoon said of Kim. “He is a pal whose leadership has contributed to elevating North Korean football to a world-class level.

“I was so glad to see him after such a long time.”