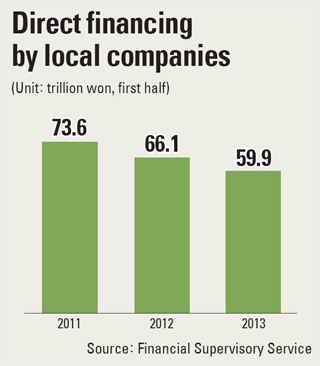 Local companies’ direct financing in the first half of this year dropped more than 6 trillion won ($5.36 billion) mainly due to concerns the United States might reduce its quantitative easing measures and higher yields.

“Corporate bond issuance grew gradually from January to April, but after May the volume started going down,” said an FSS official. “The volume dropped after May when concerns started growing over the United States tapering its quantitative easing measures that led to a hike in yields.”

Of total stocks issued, almost all capital was raised by large companies with only 0.02 percent by small and midsize companies, which raises concerns over hardships the more economically vulnerable group faces in raising capital in the sluggish economy. One way companies raise money is through corporate bonds.

SMEs have been experiencing hardships in accessing capital through direct financing because their credit ratings tend to be lower than those of large companies and banks have been reluctant to help SMEs issue bonds.

In March, FSS Gov. Choi Soo-hyun said the government will devise measures to “accelerate SMEs’ direct financing so they can access capital more easily.” According to an official from the FSS, measures are still under “consideration.”