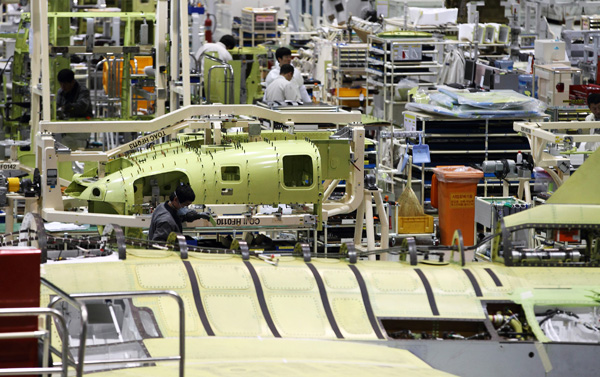 The Park Geun-hye administration is stepping up efforts to sell a handful of companies in which the government and state-run financial institutions have large stakes.

In addition to the recent announcement detailing the sale process for Woori Financial Group, the government also aims to sell Korea Aerospace Industries and Daewoo Shipbuilding and Marine Engineering as soon as possible.

Market observers suggest the Park government wants prompt sales of these companies to recoup some of the trillions of won in public funds invested in cash-strapped companies during the 1997-8 Asian financial crisis and use the proceeds to implement some of the president’s campaign promises like expanding welfare benefits. 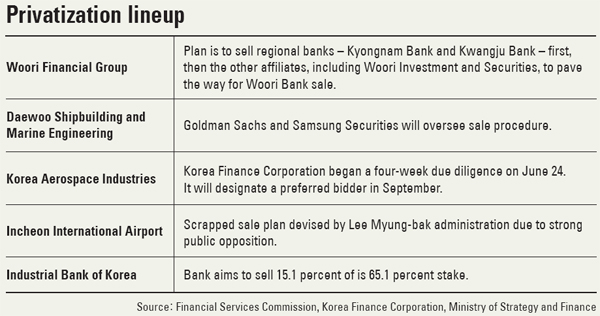 The Financial Services Commission has decided to sell the group’s two regional banks - Kyongnam Bank and Kwangju Bank - first followed by the other affiliates, including Woori Investment and Securities. Woori Bank will be sold last.

“Privatization of Woori Financial will be completed by the end of next year,” FSC Chairman Shin Je-yoon said on May 28. “And speed matters more than price when it comes to clearing nonperforming assets.”

Market observers estimate the two regional banks are worth about 1.1 trillion won ($983 million).

Hana Financial Group Chairman Kim Jung-tae was quoted as saying Wednesday that he has asked executives to look into acquiring two banks.

KB Financial Group Chairman Lim Young-rok told reporters Wednesday that his group is not interested in acquiring Woori Bank, hinting that the group may bid for Woori Investment and Securities.

“KB Financial Group’s business is focused too much on the banking sector given that KB Kookmin Bank is the embryo of the group,” Lim said in his July 11 inauguration speech. “It’s urgent to strengthen the group’s non-banking affiliates.”

KoFC began a four-week due diligence of Korea Aerospace Industries on June 24, and the state-run finance company plans to appoint a preferred bidder in September with a goal of completing the sale of the nation’s only aircraft manufacturer this year.

KoFC has a 26.4 percent stake in KAI, while Samsung Techwin, Hyundai Motor and Doosan Group hold 10 percent each.

Last year, two sales attempts for KAI failed because they couldn’t meet legal requirements. Market observers predict selling KAI will not be easy given the strong opposition of its labor union. The union has said both potential buyers don’t seem to have a strong commitment to develop KAI. “The government has said the aerospace industry is a backbone industry that will drive the new government’s creative economy initiative, but it is ambivalent in that it refrains from making investments in the company and wants to simply recoup public funds and hand over KAI to a private company,” the KAI union said.

The Park administration also is trying to sell Daewoo Shipbuilding and Marine Engineering four years after Hanwha Group abandoned its ambition to acquire the shipbuilder.

“We’re weighing the possibility of selling a 17.15 percent share in Daewoon Shipbuilding separately from the 33.1 percent stake held by Korea Development Bank,” said an official at the FSC.

If that were the case, managerial control of the shipbuilder would not change since Korea Development Bank is the largest shareholder.

GS and Doosan have been mentioned as possible buyers but they might not have sufficient liquidity.

“Samsung Electronics, which has abundant liquid assets already has Samsung Heavy Industries as a shipbuilding affiliate and Hyundai Heavy Industries is run by the younger brother of Hyundai Motor Group’s chairman, so there is little chance these companies will compete for DSME,” said Choi Won-kyung, an analyst at Kiwoom Securities. “GS is a possible candidate, but it’s not in a good shape due to the slowdown in the oil refinery market.”

Other experts raised concerns about putting too many companies on sale at the same time during a prolonged global economic slowdown.

“I understand that the Park administration wants to wrap up the sale of some companies as early as this year given that her predecessor made multiple failed attempts,” said an industry insider. “But it needs to approach this matter carefully and deliberately to avoid repeating those failures.”