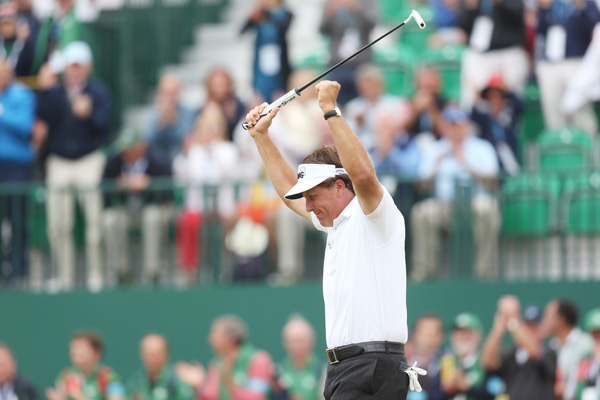 Phil Mickelson reacts after sinking a birdie putt on the 18th green during the final round of the British Open golf championship at Muirfield in Scotland, Sunday. [REUTERS/NEWS1]

GULLANE, Scotland - One of the greatest final rounds in a major. Two of the best shots he ever struck with a 3-wood. The third leg of the Grand Slam.

Phil Mickelson never imagined any of this happening at the British Open.

No wonder he never took his hand off the base of that silver claret jug as he talked about the best Sunday he ever had at a major. Five shots out of the lead, Mickelson blew past Tiger Woods, caught up to Lee Westwood and Masters champion Adam Scott, and won golf’s oldest championship with the lowest final round in his 80 majors.

With four birdies over the last six holes, Mickelson closed with a 5-under 66 for a three-shot win over Henrik Stenson.

No longer is he mystified by links golf, and he has his name etched in that jug to prove it.

“This is such an accomplishment for me because I just never knew if I’d be able to develop the game to play links golf effectively,” Mickelson said. “To play the best round arguably of my career, to putt better than I’ve ever putted, to shoot the round of my life .?.?. it feels amazing to win the claret jug.”

Introduced as the “champion golfer of the year,” he held the oldest trophy in golf over his head to show it off to one side of the massive grandstand lining the 18th green at Muirfield, and then the other. An hour earlier, they gave the 43-year-old Mickelson the loudest ovation of the week as he walked up the final fairway.

He drained an 8-foot birdie putt and thrust his arms in the air, hugged caddie Jim “Bones” Mackay and whispered to him, “I did it.” After signing for the lowest final round ever at Muirfield, Mickelson huddled with his wife and children for a long embrace and waited for the others to finish.

Westwood, who started the day with a two-shot lead, fell behind for the first time all day with a bogey on the par-3 13th hole and never recovered, closing with a 75.

Scott took the outright lead with a 4-foot birdie on the 11th, and then closed as sloppily as he did last year when he threw away the Open at Royal Lytham & St. Annes. He made four straight bogeys starting at the 13th, and a final bogey on the 18th gave him a 72. At least he has a green jacket from the Master to console him.

Woods stumbled badly on his way to a 74 and was never a serious challenger.

“We know that he goes for broke, and if that’s how he was feeling and pulling it off, he’s got the ability to do that,” Scott said about Mickelson. “And he’s gone and won an Open easily. So every credit to him.”

At the end of a rough-and-tumble week along the Firth of Forth, Mickelson was the only player under par at 3-under 281. In his four other majors - three Masters and one PGA Championship - he had never started the final round more than one shot behind. “I don’t care either way how I got this trophy - I got it,” Mickelson said.