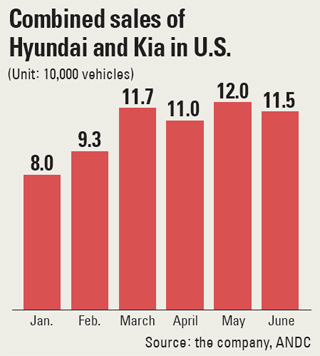 Hyundai Motor and Kia Motors reported a mixed first-half performance in the world’s three largest markets - United States, Europe and China - but analysts predict a better second half with the resumption of weekend production.

According to data from Hyundai Motor and U.S.-based Automotive News, combined sales of Hyundai and Kia were 638,361 units, down 1.1 percent from the first half of last year.

Their combined share of the U.S. was 8.2 percent in the January-June period, a 0.7 percentage point drop from 2012.

However, even Hyundai’s slight sales increase was not impressive in light of overall U.S. auto sales growth of 7.5 percent with 7.8 million vehicles sold.

In Europe, Hyundai and Kia combined total for 399,047 in sales in the first half, down 1.5 percent from a year ago, according to data from the European Automobile Manufacturers’ Association. Hyundai sales fell 3.6 percent to 223,594, while Kia had a 1.3 percent increase to 175,453 vehicles sold.

However, their combined market share increased 0.3 percentage point to 6.2 percent from a year ago, as their competitors struggled in the European economic slowdown. Hyundai and Kia’s European market share ranked eighth.

Hyundai said weekend overtime work stoppages earlier this year were a major reason for poor sales in the United States and Europe because some models are built in Korea and exported.

Overtime work resumed about two months ago, and the company estimated the March to May work disruption caused 1.7 trillion won ($1.5 billion) in damage.

However, experts said sales should improve in the second half, especially in the United States with facelift models due to be released.

While sales in the United States and Europe were not impressive, Hyundai Motor Group said sales in China, the world’s largest auto market, were at record levels.

Experts said sales in China increased sharply because both companies operate large factories there and tailor models to the market.

“With the full operation of Hyundai’s third plant in Beijing and good sales of localized models, we achieved 53 percent of our annual sales goal of 1.47 million units in this first half,” said a Hyundai Motor Group official.

“Hyundai and Kia’s market share in China was 9.2 percent in 2010, but it increased to 9.6 percent in 2011 when Beijing started its vehicle registration restriction,” Seo said. “Hyundai’s wage bargaining with the union is also expected to not be as fierce as last year.”