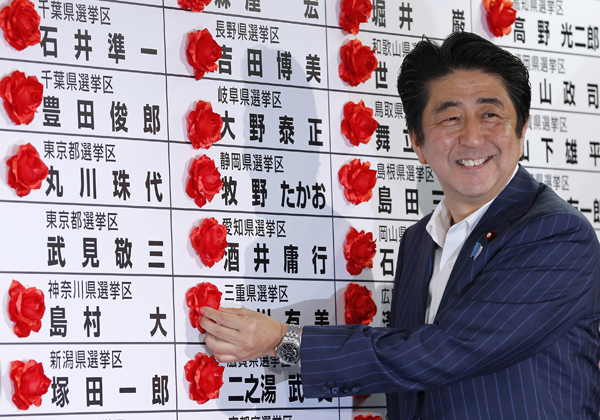 Japanese Prime Minister Shinzo Abe smiles as he places a red rosette on the name of his Liberal Democratic Party’s winning candidate during ballot counting for the upper house elections at the party headquarters in Tokyo Sunday.

TOKYO - Japanese Prime Minister Shinzo Abe’s ruling coalition won a comfortable majority in the upper house of parliament in elections, gaining control of both chambers and a mandate to press ahead with difficult economic reforms.

The win is an endorsement of the Liberal Democratic Party’s “Abenomics” program, which has helped spark a tentative economic recovery in Japan. It’s also a vindication for Abe, who lost upper house elections in 2007 during his previous stint as prime minister.

“We’ve won the public’s support for decisive and stable politics so that we can pursue our economic policies, and we will make sure to live up to the expectations,” Abe told public broadcaster NHK after he was projected to win based on exit polls and early results.

Abe’s LDP and its coalition partner, New Komeito, won 76 of the 121 seats contested. Along with seats that weren’t up for election, the bloc now has a commanding 135 seats in the 242-seat upper chamber.

The victory also offers the hawkish Abe more leeway to advance his conservative policy goals, including revising the country’s pacifist constitution and bolstering Japan’s military, which could further strain ties with key neighbors China and Korea, who are embroiled in territorial disputes with Japan.

Controlling both houses of parliament has been an elusive goal in recent years. A divided parliament has had difficulty passing legislation, and voters fed up with the gridlock and high leadership turnover appeared willing to opt for the perceived safety of the LDP, which has ruled Japan for most of the post-World War II era.

Abe said voters supported the LDP to push his party’s economic policies and said it would be the government’s top priority.

The Liberal Democrats favor revising the country’s pacifist constitution, drafted by the United States after World War II, to give Japan’s military a larger role - a message that alarms the Chinese government but resonates with some Japanese voters troubled by territorial disputes with China and Korea and widespread distrust of an increasingly assertive Beijing.

Abe has upset both neighbors by saying he hopes to revise a 1995 apology by Japan for its wartime aggression and questioning the extent to which Korean, Chinese and other Asian women were forced to provide sex for Japanese soldiers before and during World War II. Revising the constitution would require two-thirds approval by both houses of parliament and a national referendum. Polls show the public is less interested in such matters than in reviving the economy and rebuilding areas of northeastern Japan devastated by the March 2011 earthquake and tsunami.

Chief Cabinet Secretary Yoshihide Suga said the LDP would try to make progress on constitutional revision because it’s the party’s long-cherished goal. “We have sought to revise the constitution in order to have one of our own. We have finally come to a point where a revision is a realistic option. We would definitely want to deepen a discussion,” Suga told broadcaster NTV.