Talks over Kaesong park will go into sixth round

Talks over Kaesong park will go into sixth round 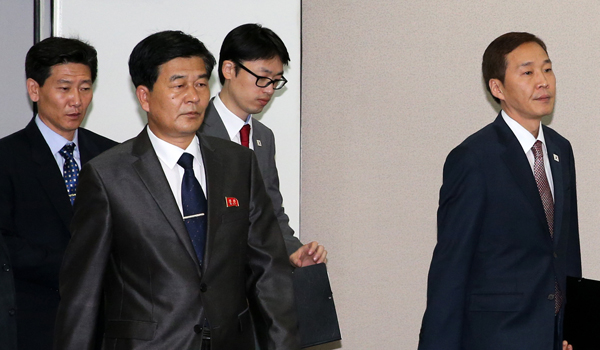 Kim Ki-woong, right, chief negotiator for South Korea, and Pak Chol-su, second from left, North Korean chief negotiator, walk into a meeting room yesterday for the fifth round of talks on the Kaesong Industrial Complex. [NEWS1]

South and North Korea agreed to hold additional talks on Thursday over reopening a jointly-run industrial park after making some progress in the fifth round of low-level dialogue yesterday.

Both Koreas once again exchanged revised drafts of an agreement yesterday to take steps to reopen the Kaesong Industrial Complex, a cross-border factory park based in city of Kaesong, North Korea, which has been shuttered since April because of strained inter-Korean relations.

Kim Ki-woong, South’s chief negotiator, said at a briefing in Kaesong after the talks that the two sides discussed four issues about the complex: How to prevent further shutdowns; policies and measures to safeguard Southern businessmen and their assets in the complex; how to attract foreign investment to the Kaesong park; and reopening the complex.

“South and North Korea confirmed they have some common views and differences in the negotiations,” Kim said at the briefing. “As a result, we made some progress at the negotiations, but there were some points we should adjust. So we decided to meet again in the Kaesong complex on Thursday.”

The South wants concrete measures to prevent the North from holding the eight-year-old factory park hostage in times of political tension.

On its side, the North wants the immediate resumption of business at the park without any prerequisites.

In opening remarks, South Korea’s chief negotiator Kim told his Northern counterpart Pak Chol-su that: “Previously, you mentioned, ‘We would be able to see a peak after the fog is cleared,’ which I think was a good comment. I have expectations that we could open up the way for significant development of the Kaesong Industrial Complex by taking this crisis as an opportunity.” South Korea also wants to invite businesses from other countries into Kaesong.

But Pak sneered at the remark.

“I think there are people who misinterpreted my comment, particularly, the Southern media,” Pak said. “They misunderstood that the ‘peak’ I mentioned was the immediate resumption of the operation. What I meant was whether [the sky over] the peak of Mount Bukak is as clear as that over Mount Taesong,” Pak said.

Mount Bukak in Seoul is where the South’s Blue House is located, while Mount Taesong in Pyongyang has tombs of national heroes of North Korea and Ko Yong-hui, the mother of North Korean leader Kim Jong-un.

BY KIM HEE-JIN AND THE JOINT PRESS CORPS [heejin@joongang.co.kr]