Deluge for Seoul and a drought for the south

Deluge for Seoul and a drought for the south 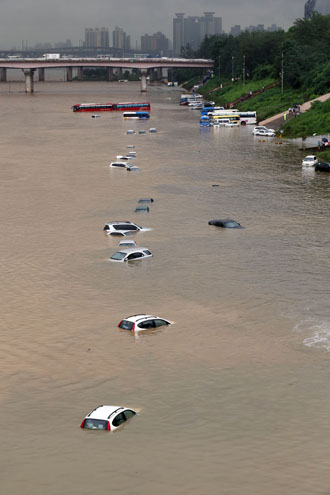 Dozens of vehicles are submerged yesterday in a parking lot on a bank of the Tancheon, a tributary of the Han River in southern Seoul, as water levels rose after heavy rains in the Seoul area. While it rained heavily in the middle section of the Korean Peninsula for the last several days, there was scant precipitation in the southern regions over the same period. By Kim Seong-ryong

Weatherwise, the summer of 2013 will be remembered as a Tale of Two Countries.

While heavy rain has been soaking the central region including Seoul, Gyeonggi and Gangwon, farmers in southern regions including Jeju Island are so parched they’re praying for precipitation.

Roads along the Yangjae Stream in southern Seoul and Jamsu Bridge over the Han River, have been inundated. In Gwangju, Gyeonggi, three schools were closed yesterday after the Gonjiam Stream burst its banks.

Around 7:10 a.m. yesterday, the Seoul Metropolitan Government issued a warning of heavy rain.

Vehicles and pedestrians were kept off Jamsu Bridge and several areas near Gangnam and Sadang Station of subway line No. 2 were drenched.

About 10 to 20 centimeters (3.94 to 7.87 inches) of rain flooded those areas, causing serious traffic congestion in the morning rush hours. The warning was lifted at 10:40 a.m.

A series of accidents occurred in southern Gyeonggi. Around 12:15 p.m., a man in his 70s working at a jjimjilbang, or public bathhouse, in Yeoju located next to a small mountain was buried in a landslide. He was sent to a nearby hospital but died there.

A 60-year-old minister was swept away by earth and sand in another landslide as he was evacuating his church.

The local police found his body about 50 meters (164 feet) away from where he was swept away.

Icheon Police are also searching for another 60-year-old who went missing around 10:35 a.m. after he went out to check the water level in his rice paddies.

According to the Gyeonggi Provincial Government, Yeoju was hit with 354 millimeters of rain as of yesterday while Icheon had 230, Yangpyeong 234, and Hanam 161 millimeters.

The Korea Meteorological Administration said Seoul, Gyeonggi and Gangwon will be soaked with an additional 120 millimeters of rain today.

But down south, people are begging for rain.

The weather is causing serious damage to crops in Jeju such as beans, sesame plants and watermelons, boosting their average selling price by about 20 percent.

“We sometimes use sprinklers, but the water just vaporizes in 10 to 20 minutes due to the high temperatures and strong sunlight,” Kim Yoo-kyung, a 66-year-old sesame farmer, told the JoongAng Ilbo.

The maximum temperature for Daegu and Jeonju, North Jeolla, was 34 degrees Celsius (93.2 Fahrenheit). The weather agency said the summer monsoon for the southern region will likely begin from tomorrow and by the end of the week for Jeju.