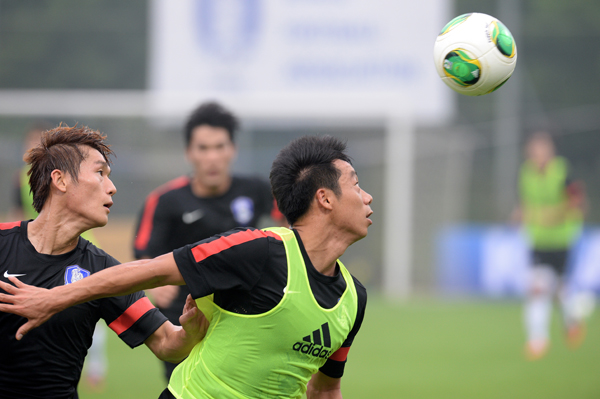 Hong Myung-bo’s squad wants to revive “Koreaphobia” when it faces China during the second match of the East Asian Cup to be held in Hwaseong, Gyeonggi, tonight.

“We should put our best [in preparation for the China match] until tomorrow,” Hong said while training his players at the National Football Center in Paju, Gyeonggi, yesterday. “We will try to get a good result against China in any circumstances.”

Starting with a 1-0 loss at the Bangkok Asian Games in December 1978, China’s men’s national team failed to beat Korea in the next 30 years - a winless streak that reached 27 games (including 16 losses) through a 3-2 loss during the third edition of the East Asian Cup in China in 2008.

China snapped the streak in 2010, and did so in a convincing manner. It routed the 2002 FIFA World Cup semifinalists, 3-0, during the fourth edition of the East Asian Cup in Japan in 2010 and has returned to the four-nation competition as a stronger team. It held Japan to a 3-3 draw on Sunday.

Unlike Korea, Japan and Australia, who lost many top players to overseas leagues, China brought many of its best players to the East Asian Cup, six of them from Guangzhou Evergrande, the Chinese Super League winner.

Gao Lin, a Guangzhou striker, scored 16 goals in more than 60 games for China. Three more players who were capped 60 times or more: Zheng Zhi, a Guangzhou midfielder, Sun Xiang, a Guangzhou defender, and Qu Bo, a striker for Guizhou Renhe.

The winner of the 2010 East Asian Cup is seeking redemption after a humiliating 5-1 loss to Thailand on June 15, which resulted in the sacking of coach Jose Antonio Camacho. Fu Bo, China’s U-22 national team coach, is taking the helm of the Chinese team during the Cup.

“We saw the China-Japan match and came to a conclusion that its strength is not to be overlooked,” Hong said yesterday, speaking of China. “As far as I know, they came with the best members. I could see myself that they have many superb players technically.”

Goalie Jung Sung-ryong, the most capped player on Hong’s squad, saw Korea lose to China, 3-0, in 2010 when he was a backup goalkeeper for Korea.

“The memory at that time remains a big pain,” Jung said on Monday. “But, we need to focus on the matches in the future rather than on the ones in the past. Lest we should have that experience again, I will get into the China game with a whole new mind-set.”

Hong, whose debut as national team coach ended in a scoreless draw with Australia on Saturday, said that he may change the lineup against China, although he did not go into detail.

The four-back players in Australia match to whom he gave a 100-point mark - Kim Chang-soo, Hong Jeong-ho, Kim Young-gwon and Kim Jin-su - are likely to remain, but his striker pick, Kim Dong-sub, could sit out the China match. Instead, Kim Shin-wook, who was substituted in the closing minutes against Australia, or Yeom Ki-hun, a veteran striker that made a comeback to the national team after a one-year absence, could start against China.

Meanwhile, Korea’s women’s team will also play against China during the second match of the Women’s East Asian Cup at Hwaseong, today. Yoon Duk-yeo’s squad lost to North Korea, 2-1, on Sunday. The North will meet Japan in Hwaseong tomorrow in a match between two of the world’s top 10 teams.