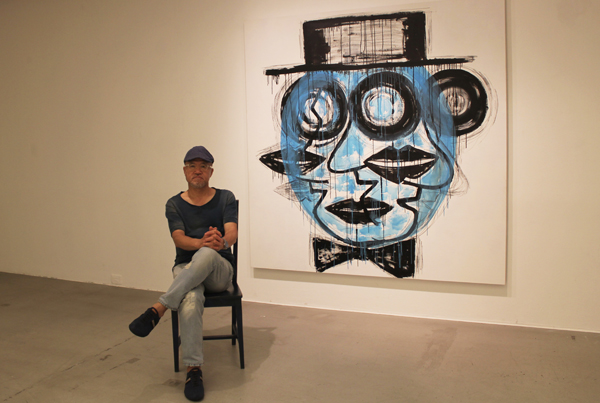 Ci Kim poses with one of his self-portraits, in which three faces overlap, at his solo show at Arario Gallery Cheonan. Provided by the gallery

When a businessman collecting art evolves into an artist himself, people tend to doubt his artistic integrity. Despite such skepticism from the people around him, Ci Kim, chairman of Arario, has been an artist for more than a decade. He is now holding his seventh solo show, titled “Sailing” at Arario Gallery Cheonan, which his company operates in South Chungcheong.

About 30 works on display range from paintings to installations of objects that Kim found on beaches, or from the waste remaining after other artists’ exhibitions in the gallery. Some of the paintings are made of crushed tomatoes or iron powder, as Kim has been eager to use unique materials.

“At first, I worried about my identity as a businessman, art collector and artist,” Kim said last week, pointing to one of his self-portraits in which three faces overlap. “Then I’ve reached the idea that I’m an artist above all and that my business and collecting are part of my performances as an artist. The idea has got me relaxed.”

Kim was recently listed as one of the world’s top 200 collectors by the New York-based art magazine ARTnews for the sixth time.