For Lotte chief, business as usual

For Lotte chief, business as usual 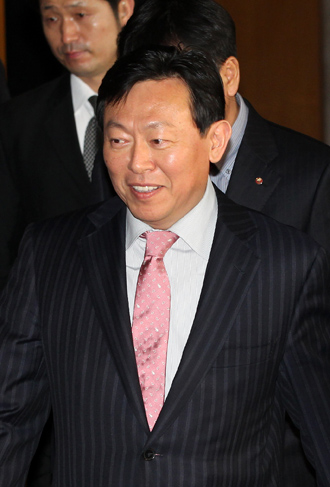 Security was unusually tight on the first floor of Lotte World in Jamsil, southeastern Seoul, on Saturday as Lotte Group Chairman Shin Dong-bin showed up to tour the newly opened Hi-Mart. The nation’s leading electronics retailer was taken over by Lotte Group last year.

With a beige blazer on his arm, Shin was briefed as he walked among the latest smartphones and laptops.

Since a crackdown by National Tax Service agents and the Fair Trade Commission on the nation’s fifth-largest conglomerate’s key affiliate Lotte Shopping, Shin has continued his activities with no hint of concern.

Some in the industry expected Shin to keep a low profile during the investigation. Lotte Shopping, in particular, has been on full alert since 150 tax agents showed up last week. It is the second-largest tax investigation of the nation’s top conglomerates since CJ Group, whose Chairman Lee Jay-hyun was indicted on charges of creating slush funds and evading taxes.

Since last year there have been a growing number of investigations involving founding families of the nation’s leading conglomerates. Unlike in the past when heads of conglomerates were frequently given light sentences for business-related transgressions, punishment has gotten harsher. Hanwha Group Chairman Kim Seung-youn and SK Group Chairman Chey Tae-won are both behind bars.

The investigations of the conglomerates were expected to intensify after President Park Geun-hye last month said she would make sure that tax evaders at home and abroad would be brought to justice.

There have been rumors since May that Lotte could be the next target.

Although the investigation is still in its early stages, Shin continues to push ahead with his business activities, including public relations.

The day after tax agents raided the offices of Lotte Shopping and other affiliates including its movie theater operator, Shin last week signed a memorandum of understanding with the Defense Ministry to finance activities to express gratitude to foreign veterans who fought in the 1950-53 Korean War.

Lotte Group, however, tried to downplay its recent activity.

“It’s nothing particular, as the chairman often visits department stores and discount stores on weekends,” said a Lotte Group spokesperson. “It has been only a week since the one-day tax investigation took place, and we are still waiting for the result of the investigation. In the meantime, there has not been any change in our sales and marketing activities.”

“The market does not seem so concerned with the tax audit on Lotte Shopping and the stocks were not affected by it, either,” said Yang Ji-hye, an analyst at Kyobo Securities. “Falling stocks reflected stagnant sales at Lotte Department Stores in July.”

Lotte Group said it will continue to gear up its overseas business projects as planned with its department store scheduled to open in Chengdu, China, next month. It opened a store in Weihai in April. Lotte Confectionery, the group’s confectionery supplier and Korea’s biggest confectionery firm, also acquired Kazakh confectionery company Rakhat JSC in July to expand its presence in Central Asia.

A Lotte spokesman confirmed plans to raise at least $1 billion through the IPO in Singapore.