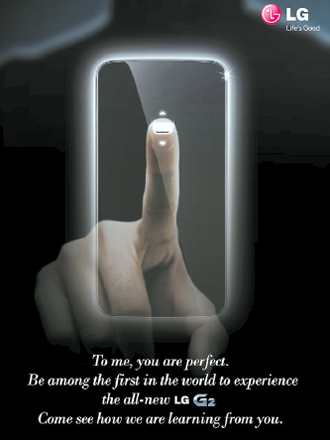 The image on LG’s invitation has given rise to speculation that the on-off button has been moved to the back of the G2. Provided by the company

LG Electronics is set to unveil its flagship G2 smartphone on Aug. 7 in New York, inviting 500 members of the press from around the world - the first time the company has held an international event for a smartphone launch.

“LG G2 Day” will take place at 11 a.m. Aug. 7 at Frederick P. Rose Hall, Home of Jazz at Lincoln Center near Central Park, according to LG.

The invitation image from LG showing a finger touching the upper part of the back of the gadget signals that the nation’s No. 2 smartphone producer has relocated the on-off button to the back.

The up and down arrows adjust volume. Industry speculation is that the new phone will have the Snapdragon 800 octa-core processor, boasting much greater speed, richer graphics and longer battery life than its predecessor.

Having adopted a new brand policy to step up its premium product lineup, LG has decided to remove the Optimus name from the G2. Its predecessors were Optimus G and Optimus Pro, and G carried multiple connotations such as good, great and genius.

The upcoming New York event “shows our confidence in the success of G series and LG G2 [smartphone],” said Park Jong-seo, president and CEO of the mobile communications division.

LG said the company has opted for the Big Apple because it is a global media center located in the United States, the world’s largest smartphone market and a fierce battleground.

LG also plans to stream the event at its home page at G2.LGMobile.com as well as its Facebook and YouTube sites.

In the unprecedentedly large-scale event, LG probably took a cue from Samsung Electronics, which threw a similar event it routinely calls “Media Unpacked” at Radio City Music Hall on March 14 in the presence of 3,000 press members and partners for its Galaxy S4 launch.

The two largest smartphone makers earlier waged a war of nerves in New York. A day before the Samsung event, LG changed put an ad for its flagship Optimus G smartphone on a giant electronic display in New York’s Time Square that sat directly above a teaser billboard for the Galaxy S4, which Samsung had put up a week earlier. LG also mimicked the white-letters-on-black-background motif of the Samsung teaser.

As of the first quarter, Samsung accounted for 32.7 percent of the global smartphone market, trailed by Apple at 17.3 percent and LG at 4.8 percent.

Despite the huge gap, the LG and Samsung are poised for yet another in the United States, this time with curved OLED (organic light-emitting diode) TVs.

LG celebrated the U.S. launch of its 55-inch OLED TV carrying a price tag of $14,999 at a Best Buy store in Minnesota on Monday, while Samsung began accepting preorders for its model at the same price. Shipments are expected to begin in two weeks.

Back home in Korea, LG launched the product a month earlier than Samsung.