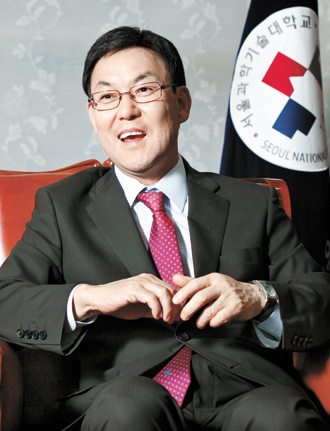 With such a tight job market for university graduates, pressure to get into a top-ranked school in Korea is higher than ever. But what’s the Korean university with the best job-placement rate? Surprisingly, it is not Seoul National, Yonsei or Korea University, Korea’s three most sought-after secondary institutions.

The school that does the best in placing its graduates is actually Seoul National University of Science and Technology (SeoulTech), the lesser-known science and engineering university in the north of the city.

Namkoong Keun, president of SeoulTech, says the university’s success is no accident; SeoulTech focuses on the training needed to help its engineers do well in the job market.

The Korea JoongAng Daily sat down with the SeoulTech president to discuss the school’s secrets to hiring success and its future plans.

Q. Seoul National University of Science and Technology has grown over the years from a vocational school to a full-fledged university. How did the university make such a large change?

A. We set a goal of becoming one of the major state-funded institutes that specialize in IT and science. What distinguishes SeoulTech from other technology-oriented schools lies in how our courses integrate engineering with management.

For example, we have a major called Mechanical Systems and Design Engineering. Most universities teach mechanical systems and design separately, but we put them together to increase the synergy effect. This goes hand-in-hand with what the 21st-century demands of professionals: convergence that transcends the sciences, the humanities and the arts.

That’s the same for the Department of Electronic and IT Media Engineering. The major encompasses both electronics and aspects of information technology with multimedia processing to foster talent who will contribute to the high-tech IT industry. Graduates will fare well in society where an array of technologies and services are now starting to merge, in electronics, telecommunications, broadcasting, multimedia and the Internet.

SeoulTech also merged visual design and engineering design majors into the Department of Design, where cross-disciplinary research and convergence education is offered. With the change, we think the integrated major can become one of the top-60 design programs in the world.

SeoulTech is known for having the best job placement rate in Korea for graduates. How did you accomplish that?

First of all, we organized a practical curriculum by offering students hands-on experience. It’s easy to limit engineering courses for undergraduates to theoretical lessons.

But what we are trying to do is let students apply the technology they learn as much as they can. This is why we have close ties with industry and major companies like LG, offering internship opportunities for undergraduates.

As a result, about 73.5 percent of graduates succeed in landing jobs right after graduation. This is significant when compared to the 54.5 percent national average in 2011. According to a report by the Ministry of Education, this is the best placement rate among Korean universities with more than 3,000 students.

The purpose is to help them successfully land jobs and to provide guidance in developing their future. But this is not only about jobs. The center also supports students who are experiencing emotional challenges, such as depression.

In addition to these kinds of facilities, I think our faculty members’ commitment to excellence goes a long way toward our school’s strong performance. We have a merit-based salary protocol and a very strict, numbers-based evaluation system to assess the performance of professors and school personnel, and we regularly release that data.

As you mentioned, engineers now need to be more versatile. But engineering students tend to lag behind in languages and learning foreign languages like English. How is the school preparing students on this front?

The center opened a variety of for-credit language programs, including TOEIC, TOEFL, and free-talking classes, to help enhance students’ command of English. We also have a language center called the STEP Program of Language Center. The center regularly holds speaking contests and various English tests.

Top-performing students at the institute are awarded chances to attend overseas language programs. There is an intensive English language camp held during summer and winter breaks. During the semester, students may also build up their English skills by taking English courses free of charge.

How does the school operate student exchange programs with overseas universities?

We exchange professors and students with 84 universities in 26 countries and support our students’ living expenses when they pursue their major courses at the foreign universities.

SeoulTech also has a partnership with the Higher Colleges of Technology in the United Arab Emirates, offering exchanges of faculty and students under the terms of a memorandum of understanding that was signed in 2011. Under the terms of the MOU, the two schools will work closely to promote the exchange of faculty for joint teaching and research opportunities, as well as conducting collaborative research in areas of mutual interest. We consider this an important step in fostering science and technology exchanges between the two countries.

We invite foreign students from our partner schools to Korea to give them an opportunity to appreciate Korean culture and dynamics through the program called SeoulTech International Summer School.

Is there any particular field of study that the school aims to develop further?

We are putting in resources to improve courses related to robotics. The robotics industry is one of the most promising sectors of the future. The Department of Mechanical Systems and Design Engineering mainly deals with robotics. So we encourage professors to teach about electrical and electronics control, computer and materials technology to create advanced robotics machines. This year, the school’s students won the top prize in the category of humanoid robots at the 2013 International RoboGames held in San Francisco. This shows that we have managed to tailor courses that equip students with world-leading skills.

Another area we are focusing on is environmental engineering. The drawbacks of rapid industrialization are taking a toll on mankind and many countries are having trouble dealing with excessive energy consumption, surging urban population and environmental pollution, including water, air and soil pollution.

Such environmental challenges will fuel demand for environmental engineers across the globe. Environmental organizations take seriously abnormal temperatures, the depletion of the ozone layer and desertification, all of which deteriorate our environment, and there is an imminent need to address these serious environmental issues. So environmental experts can turn what they learn into feasible solutions in the global arena.

We also try to distinguish ourselves through business administration courses. The courses gravitate towards producing creative minds that are well-grounded in the humanities and conventional business, as well as the high-tech sector. We intended to foster global leaders equipped with practical IT expertise and business management skills. So we encourage business majors to earn dual degrees from the Departments of Industrial and Systems Engineering or the Industrial and Systems Engineering Program.