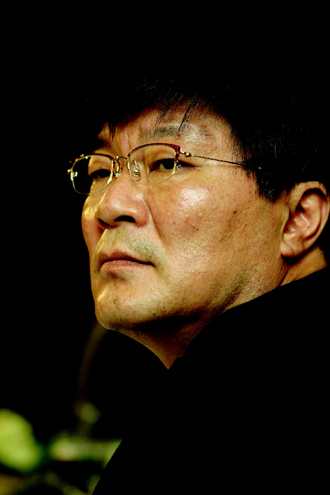 A celebrated TV director-producer with money problems committed suicide yesterday by locking himself in a shabby gosiwon in Bundang, Gyeonggi, and lighting charcoal briquettes, according to the police.

Kim Jong-hak, who directed such popular Korean drama series as “Sandglass” and “Eyes of Dawn,” was involved in a lawsuit for not paying cast members of his most recent series, “Faith,” and was charged with alleged fraud in February, which he denied.

The Bundang Police Precinct said Kim was found dead by a custodian of the gosiwon, or lodgings for cram school students, Tuesday morning. A suicide note was found that read, in part, “I say sorry to my family.” There was no evidence of anyone breaking into the room.

“He said that he would stay here for two days but he didn’t come out of the room after the check-out time passed,” the custodian told police.

“When I stepped inside, I found him dead,” the custodian said. “He used green-colored tape to seal the doors.”

Earlier this month, the 62-year-old director-producer was forbidden to leave the country due to the money complaints filed by the cast and crew of “Faith.”

Kim had been in China filming a new drama for Chinese television when South Korean police summoned him home on account of the “Faith” lawsuit.

Sources close to Kim say the lawsuit had taken a toll on him, but they didn’t know if it was the sole cause of his suicide.

“His will is currently sealed so we don’t know whether he admitted the fraud charges and then decided to commit suicide,” said the police.

“Faith,” which starred A-list celebrities including Kim Hee-sun and Lee Min-ho, was highly anticipated and expensive to produce with a 10 billion won budget. But it failed to take off with viewers. Ratings for “Faith” lingered around 10 percent.

Kim had faced legal problems before.

Last year, some crew members from “Faith” sued the producer for signing duplicate publishing contracts for the program’s soundtrack.

Even before “Faith,” Kim was involved in litigation filed by a construction company. The president of the company accused the producer of not paying 265 million won to the company for a drama studio it built.

Kim made his name with 1995’s “Sandglass,” which had ratings of 64 percent. In terms of ratings, the drama remains in the top five most popular serials of all time in Korea.

Kim was called “one of the most acclaimed and influential TV directors in Korea for the last 30 years” by Variety Magazine in 2009.

The funeral service will be held at Asan Medical Center in southern Seoul.