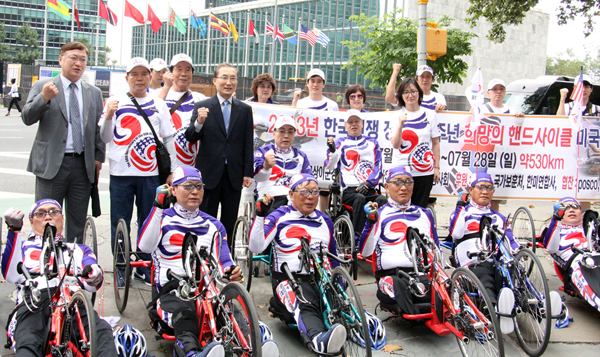 NEW JERSEY - The 12 athletes were primed for their journey, but the weather showed no signs of cooperating.

Three hours after departing on handcycles from United Nations headquarters in New York, the rain wouldn’t relent. The athletes, peddling entirely with their hands, were soaked. So too were the flags of the Republic of Korea and the United States of America they carried.

One cyclist started to wobble and finally capsized. He was Kim Yun-geun, 65, who lost his legs fighting in the Vietnam War. Fortunately, the other cyclists managed to swerve around him and Kim wasn’t injured.

The 12 athletes had another six days and nights to complete their 530-kilometer (329-mile) handbike journey from New York to Annapolis, stopping in Philadelphia, Baltimore and Washington, DC. All 12 were veterans of the 1950-53 Korean War, Vietnam War or other conflicts (such as against North Korean spies) that earned them their disabilities. Most had lost their legs or the use of them.

The purpose of their grueling journey was to pay their respects to all the foreign soldiers, including U.S. troops, who fought for South Korea in the Korean War ahead of the 60th anniversary of the armistice agreement Saturday. The armistice stopped the fighting but never led to a peace treaty.

The 12 disabled veterans, aged between 42 and 70, accomplished a similar 700-kilometer marathon between Busan and Incheon last year. Some have earned gold medals at the Paralympics in archery, table tennis, shooting or tennis.

Their odyssey on the U.S. East Coast began with a ceremony in front of UN headquarters to commemorate the foreign troops that took part in the Korean War. The cyclists paid silent tribute and also read statements of gratitude for their sacrifice.

“On Korean ground soaked with the blood of soldiers from the 16 nations participating in the war, we will make our efforts for more flowers to blossom,” read Baek Guk-ho, a Vietnam War veteran and a poet.

“Although we are handicapped people who have to live with other people’s help, we think we can be a source of hope if we overcome our own challenges,” said Park Sang-geun, vice president of the Korean Disabled Veterans Organization.

During their journey, many Americans waved and cheered the veterans on. In Fort Lee, New Jersey, the Koreans were welcomed by Gene Iaconetti, a 92-year-old World War II veteran, and 10 Vietnam War veterans.

The first day of their journey got them 40 kilometers to Princeton University at around 9 p.m., where they slept.

They are scheduled to arrive at the Korean War Veterans Memorial in Washington on Saturday, the anniversary of the armistice signing. On Sunday, another hand-cyclist team of U.S. disabled veterans will join them in front of the White House, and follow them to Annapolis.

U.S. President Barack Obama will meet with the group on Sunday.